when a Zombie is revealed from a Gravestone.
Why not rob graves? They're not going to miss it. It's not like the dead are rising up or anything.
Grave Robber is a triassic super-rare zombie card in Plants vs. Zombies Heroes, and a member of the

Bullseye trait, and its ability gives it +1

every time a zombie comes out from a gravestone, including those affected by In-Crypted, Mixed-Up Gravedigger, Cursed Gargolith, and Graveyard.

It is based on a grave robber, a person who commits acts of grave robbery by digging up graves with the intention of stealing valuable items from those graves.

Why not rob graves? They're not going to miss it. It's not like the dead are rising up or anything.

This zombie can be used as a strong start in the game, with the stats of 2

Bullseye trait. However, since its ability only boosts strength, you will need a few health-boosting tricks to keep it alive. Although being in the Crazy class allows it easy access to strength-boosting tricks like Sugary Treat, you are better off running it in a gravestone deck, just like how its ability mentions them.

As Impfinity, it can be used as an aggressive start in either his pirate deck, where it can be supported by Swashbuckler Zombie and Captain Flameface, or in his gravestone deck alongside Headstone Carver and Tomb Raiser Zombie, where it can be boosted for each zombie revealed and also serve as removal bait, keeping Impfinity's more vauable Gravestone zombies from being destroyed.

Electric Boogaloo can use stat-boosting cards to help keep Grave Robber alive, but that is about it.

Professor Brainstorm has access to bonus attack cards to dish out unblockable damage onto his opponent or clear its lane of plants. He can also use it to activate Mustache Waxer's ability (turning Grave Robber into a free zombie) and as Evolution material for Duckstache.

Z-Mech could protect it with Escape through Time and boost its health. He can also lower the Gravestone zombies' costs with Flag Zombie.

can allow him to trade better.

Grave Robber is slightly threatening due to its

Bullseye trait, and it can hit hard if enough gravestones are revealed. However, its health makes it easy to deal with. For example, one Banana Bomb deals with it unless its health is boosted. But be extra careful against Impfinity and Professor Brainstorm, as they have cards that synergize with Grave Robber. 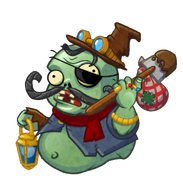 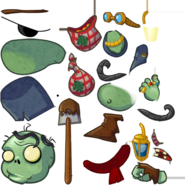 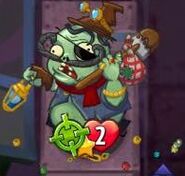 Grave Robber about to attack 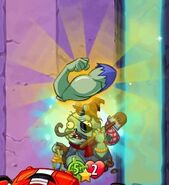 Lawnmower being used on Grave Robber 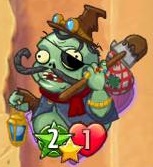 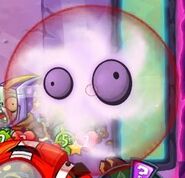 Possessed being used on Grave Robber 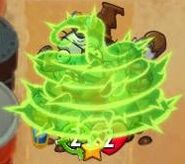 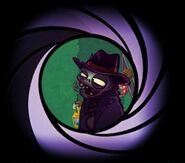 Attacking from the player's side (animated)

Attacking from the opponent's side (animated)