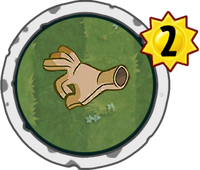 Bounce a Gravestone. Draw a card.
Warning: Don't flick gravestones in real life.
Grave Mistake is a colossal uncommon plant trick card in Plants vs. Zombies Heroes and a member of the

to play, and its ability gives the Bounce effect to a selected zombie in a gravestone and draws a card.

Its name is based on the phrase "grave mistake," which means "a serious mistake," probably also conveying a message to the zombie hero. It is also referenced indirectly by its description: flicking a gravestone is more damaging to its attacker, not the gravestone.

Its ability makes a pun on the other meaning of "grave," a place of burial for a dead body.

Grave Mistake is useful at removing any gravestone off the field, especially heavily boosted zombies (such as any zombie Bounced with Secret Agent and Valkyrie after many zombies were destroyed) in Graveyard, as the brains and turns spent to boost it will be wasted. This makes it an alternative to Grave Buster for Smarty heroes (except Citron and Beta-Carrotina, who also lead the

Guardian class), which they cannot normally use. However, unlike Grave Buster, your opponent can replay it later on since it Bounces the gravestone instead of destroying it.

But while this may sound inferior to Grave Buster, there are a few merits only it has. First of all, this card can activate Jelly Bean's ability, making it a good card for a Bouncing deck. Grave Mistake also gives you a card, giving you a chance of obtaining something you need and activating Dino-Roar abilities. Finally, since Grave Mistake puts the card back into your opponent's hand, you can make your opponent unable to block when they have 10 cards in their hand and do not play any tricks this turn.

Having a Spyris on the field also helps, as her ability allows you to determine if the Gravestone zombie played is threatening, allowing you to Bounce it with almost no repercussion.

If you are playing as Green Shadow, you can use this as a cheap way to remove a gravestone fronting Re-Peat Moss, activating its ability. This can end the game in your favor, especially if Re-Peat Moss is boosted. She can also play it on those blocking the way of her Precision Blast.

There is absolutely no way you can predict whether or not your opponent will play this on one of your gravestones, and any stat boosts it got in your hand will be gone. On the bright side, you will keep the bounced Gravestone zombie in your hand anyway, so feel free to replay it later on.

The best thing you can do against this is to not have any gravestones on the field, unless it is absolutely necessary. You can also play multiple gravestones to force your opponent to decide which one needs to be Bounced the most.

But beware of Citron or Beta-Carrotina, as they can choose between this and Grave Buster, or both.