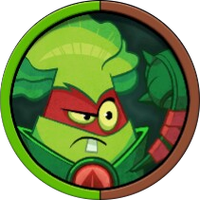 Grass Knuckles is a plant hero in Plants vs. Zombies Heroes and the leader of the

Guardian classes. His signature superpower is Power Pummel, which does 2 damage in all ground lanes. If there is no zombie on a ground lane, the zombie hero takes damage there instead.

He is the hero version of Bonk Choy.

He is based on the plant in Plants vs. Zombies 2 with a similar appearance.

His name is a portmanteau of "grass," a name that refers to many species of plants in the family Poaceae, and "brass knuckles," weapons that fit around the knuckles and are used in hand-to-hand combat, referring to how the plant he is based on attacks.

Grass Knuckles starts with "Bullseye" Plants that ignore enemy Super-Blocks. Then he grows them larger with powerful Mega-Grow effects - a nasty one-two punch!

Despite a rather odd combination of classes, Grass Knuckles' unorthodox combo of classes is very potent. With the Mega-Grow class providing boosting methods and the Guardian class giving access to tough plants, Grass Knuckles can prove to be a very tough foe.

Since many Mega-Grow plants need time to be strong, Grass Knuckles can protect them with high-health Team-Up plants from the Guardian class such as Wall-Nuts, even when they are boosted. Likewise, he can use Mega-Grow tricks such as Fertilize to boost up what are usually defensive plants to make them able to attack the zombies, or even boost low-strength Guardian plants.

You can use Potted Powerhouse on this hero as well. With

Guardian boosters like Steel Magnolia, Spineapple, and Smackadamia; it is very easy to boost Potted Powerhouse to an unbelievably mighty fighter for you to use, potentially finishing the game off in your favor.

Due to his peculiar class combo, Grass Knuckles can perform many beneficial synergies, with some at their strongest when under his use. A root deck with Starch-Lord and other root plants is useful, as Grass Knuckles has the most root cards out of all heroes (with the exclusion of superpowers). A pea deck is also lethal, as Grass Knuckles also has the most pea cards out of any hero (again, superpowers are excluded), thanks to the addition of Three-Nut, although it is not recommended to use it in a pea deck.

He can also protect a boosted plant with Root Wall so that it cannot take any damage for one turn. This is especially useful for Soul Patch. His signature superpower, Power Pummel, is useful for taking down weak zombies on the ground lanes or doing up to 6 damage to the zombie hero (though in some missions, the amount of damage changes depending on how many ground lanes there are). This is also useful for protecting plants.

Bullseye such as Sting Bean, Cactus, and Jugger-Nut, and then having them do bonus attacks by using Time to Shine or Plant Food to be able to do large amounts of damage to the zombie hero without charging their Super-Block Meter.

Grass Knuckles' weakness, however, is that he lacks reliable methods to stop early to mid-game rushes from the zombie hero, meaning that he will have a hard time dealing with Impfinity, Electric Boogaloo, or Professor Brainstorm's rush decks. Grass Knuckles does not have access to damaging tricks (aside from his signature superpower, Power Pummel) such as Banana Bomb and Berry Blast. Additionally, he does not have many instant-kill tricks, like Tactical Cuke or Whack-a-Zombie. While he does have Shamrocket and Doom-Shroom, these tricks will not help him fight rushes, unless your opponent strengths them en masse. To stop a rush deck, Grass Knuckles must fight fire with fire, boosting his plants in an effort to save himself. In addition, clever usage of bonus attacks will enable Grass Knuckles to weaken or even shut down rush decks. Using Power Pummel can prove very helpful, being the only damaging trick he possesses, despite being single-use.

Always be one step ahead of Grass Knuckles, as he is able to easily boost his plants. As with other Guardian heroes, it is often best to defeat him quickly as he will become aggressive in the late-game. If he uses Power Pummel, make sure that you have a zombie in each ground lane, especially in The Foe with the Furious Fists, or your hero will take a lot of damage. If Grass Knuckles puts down plants like Black-Eyed Pea or Doubled Mint, use tricks like Locust Swarm or Super Stench in order to destroy them before they become too much of a problem.

This deck focuses on boosting

Bullseye plants with various ways and ensuring that they hit you by either moving your zombies with Banana Peel and destroying zombies blocking their way with Grave Buster and bonus attacks via Plant Food. Destroy his plants as quickly as you can with Rolling Stone or Weed Spray, or else they will grow out of the aforementioned tricks' reach. Rustbolt would be the best counter for this deck, as he has access to Rocket Science in case something goes wrong.

This is Grass Knuckles' combo deck of Party Thyme, Re-Peat Moss, and Bananasaurus Rex. Bonk Choy provides early firepower, while Jugger-Nut and Pear Cub are able to stall zombies a few turns. Bonus Track Buckethead is a perfect counter for this deck as it shuts down the combo and leave you less to deal with. Also,

Deadly zombies and instant-kills in the

Grass Knuckles will attempt to play or make many plants on the field to boost Muscle Sprout, and can even play Onion Rings to give his weak plants a head start. If you don't take care of them quickly, he will then punish you by playing Super-Phat Beets and Tough Beets. Any Brainy hero would be a good counter due to Rocket Science. Also, due to his lack of card draw excluding Starch-Lord, he will have to either conserve his cards for a few turns, or leave his defenses to a few plants. You can also take the opportunity and rush him if he chooses to do that.

Instead of drawing cards to boost Bananasaurus Rex, Grass Knuckles has a plethora of Conjuring cards like Banana Peel, Photosynthesizer, and Starch-Lord, with all the Conjured cards being cheaper thanks to Captain Cucumber, who will also Conjure more legendary cards. Since the main Conjurers, Starch-Lord and Captain Cucumber have low stats, destroy them with damaging tricks or Rolling Stone, but watch out for Black-Eyed Pea. Quickdraw Con Man can also punish him for Conjuring cards if you have enough of them on the field.

Deadly zombies are the way to go, as their attacks can instantly destroy the boosted plants, but you should watch out for Plant Food. Super Brainz and Huge-Gigantacus are recommended, as they can make the zombies do bonus attacks. Or, if you can hold on until turn 9, Zombot 1000 can wipe them all out.

Retrieved from "https://plantsvszombies.fandom.com/wiki/Grass_Knuckles?oldid=2247955"
Community content is available under CC-BY-SA unless otherwise noted.