Grapeshot is a premium plant in Plants vs. Zombies 2. It was featured in the Jurassic Marsh Part 1 teaser Piñata Parties from November 10 to November 16 of 2015, it costs 4.99.

Similarly to Cherry Bomb, Grapeshot explodes in a 3x3 area, dealing 1800 damage per shot worth of damage to all enemies caught in the blast. However, eight grapes will also be released after the initial explosion in the cardinal and ordinal directions. The grapes can ricochet up to five times in a manner similar to Bowling Bulb's projectile, doing 200 damage per shot for each zombie they hit. In the Chinese version, its explosion can deal 3600 damage to all zombies in the 3x3 area except Gargantuars or Zombots, which only suffer 1800 damage.

Grapeshot is based on the real life Grape, a term referring to fruiting berry of vines belonging to the genus Vitis. Its explosive ability is based on grapeshots, a type of artillery shell composed of small metal balls or slugs packed tightly into a canvas bag, akin to a modern shotgun shell.

When boosted by Bombard-mint, Grapeshot's explosion damage will increase to 2400 DPS.

After exploding, Grapeshot will leave a 3x3 puddle which slows zombies down.

Grapeshot is mostly considered a straight upgrade to Cherry Bomb - while its initial profile is almost identical to Cherry Bomb's in damage, sun cost and recharge rate, the additional grapes will allow Grapeshot to control the horde far better than Cherry Bomb, as well as destroy obstacles such as tombstones at the early stage of a level in Ancient Egypt and Dark Ages and frozen blocks in Frostbite Caves. Notably, a Grapeshot can instantly defeat a full health Gargantuar (besides a Jurassic Gargantuar) if planted directly on its tile, a feat that can otherwise only be achieved by Electric Blueberry, Caulipower, Witch Hazel, and Citron's Plant Food effect.

Grapeshot is an excellent plant to use in Pirate Seas as it can easily deal with hordes of several Swashbuckler Zombies that tend to ambush the player. They can also be useful against Barrel Roller Zombies, despite that the bouncing grapes cannot hit them directly. However, if these zombies appear with groups of other zombies, the shots can easily target them. The bouncing grapes can also hit and destroy Imp Cannons but this depends on luck.

Grapeshot is also a good choice in Big Wave Beach as various zombies encountered in this world tend to bring in obstacles that trouble the player's defenses like Surfer Zombie and Octo Zombie. The initial explosion and the additional grapes can easily get rid of surfboards and octopi so that the other offensive plants can be prepared to deal with even tougher zombies like Fisherman Zombie and Deep Sea Gargantuar.

The grapes are somewhat of a hazard to the player in the Dark Ages however, as Jester Zombies can reflect them and deal massive damage to the player's defense. However, note that it cannot deflect grapes that hit it from above or below. Imp Dragon Zombies are immune to the initial explosion, but not to the ricocheting grapes, so Grapeshot should have little trouble combating them unless the grapes are used too easily. They can also be a problem if a grape bounces and kills a dangerous zombie that releases more dangerous zombies early in the level, like Chicken Wrangler Zombies or Weasel Hoarders, as they can release their Zombie Chickens or Ice Weasels and overwhelm most plants if the defense is not ready, especially in Big Bad Butte or Icebound Battleground.

Ultimately, due to the lack of actual difference in usage, Grapeshot should be used in a way similar to Cherry Bomb: to quickly neutralize threats that have breached too far into the player's defense, or to nuke high-health targets. Imitater can also be used to remedy Grapeshot's recharge issue. Using it alongside Cherry Bomb and Bombegranate can allow you to blow up the zombies far more often, assuming you have a good sun production. 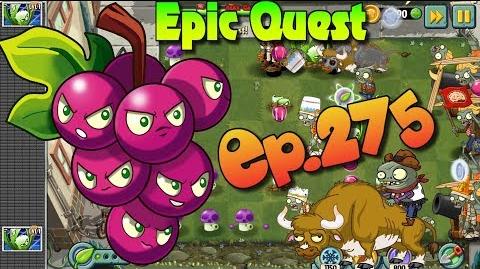 Retrieved from "https://plantsvszombies.fandom.com/wiki/Grapeshot?oldid=2165139"
Community content is available under CC-BY-SA unless otherwise noted.