.
When you think of responsibility, think of grapes.
Grape Responsibility is a colossal uncommon plant trick card in Plants vs. Zombies Heroes and a member of the

Guardian class. It can also be Conjured by Grape Power. It costs 1

to play, and its ability doubles the health of a selected plant.

It's based on red grapes, real-life fruits (botanically, berries). Its name is based on the saying, "With great power, comes great responsibility." The fact that it can be Conjured by Grape Power when one is played is another reference to this saying, as Grape Power gives the plant hero a Grape Responsibility.

Grape Responsibility is also shaped like a heart, a reference to its ability being health-related.

When you think of responsibility, think of grapes.

Grape Responsibility is not only cheap, but also very efficient; if played on the right plant, it can give the biggest health boost out of any single card.

A powerful example of a plant to play it on is Health-Nut, effectively doubling its damage output. If you want to play defensively, a plant with a lot of health and the Team-Up trait like Wall-Nut is the most viable option, turning them into a virtually unbreakable wall. Doubled Mint is another example, as it will cause his health to quadruple in two turns, provided that he didn't take any damage before his health quadruples.

Soul Patch is also a good plant with this trick as he will be able to absorb significant amounts of damage, especially if your opponents can't remove him. In addition, if Pecanolith is on the field, you can play it on a Wall-nut, effectively turning it into a 12/12 with Team-up. You can also play it on Pecanolith itself, causing it to be a 14/14.

Because of its berry tribe, Spudow can use it in tandem with Strawberrian, which can trigger his ability for a low cost. The Strawberrian also has low health, which this trick may help in compensating.

However, beware that while Grape Responsibility can boost a plant's health to ridiculous levels, they are still quite vulnerable to enemy hard removals like Locust Swarm, Rolling Stone, Primordial Cheese Shover and even any deadly zombie.

Though it is cheap, this card can become a massive threat if your opponent plays it correctly. Since they will most likely play it on a plant with a lot of health, do not expect to dispatch that plant easily in combat. Since most naturally bulky plants have low strength, Rolling Stone, Weed Spray, and Knockout should be able to deal with them plants, or they can be used after nerfing their strength. However, only hearty heroes can do that.

Deadly zombies are another option, although the former risks being countered before they get to attack. If the plant has both high health and strength, they should be neutralized with tricks suck as Rocket Science instead.

While Defensive End and Fraidy Cat can penalize your opponent for playing this trick, they aren't the best counters as the former cannot do anything against an early-game Grape Responsibility, while the latter can be lured in and blocked by the boosted plant. 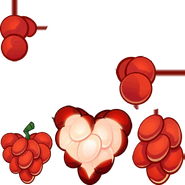