The Golf Star showed promise from an early age. Unfortunately, his habit of destroying finely manicured lawns got him booted off the PVGA tour for good.

Golf Star's primary weapon is the Golf Cannon which has the second highest firing rate out of any weapon (13 shots per second compared to the Hockey Star's 17 shots per second) and can zoom the furthest out of all other All-Stars. It deals 5 impact damage and 6 critical damage at short range; whereas it deals 3 damage for both critical and non-critical hits at long range.

An extra hole helps him to cool off faster after overheating.

Extra dimples help you to shoot for longer without overheating.

These legendary, antique club heads allow you to hit each shot harder, resulting in increased damage.

The two main perks of the Golf Star is his extremely fast rate of fire at 20 shots per second and his ability to zoom in further than all other variants, making this variant good for more long-range support-oriented tasks. The Golf Star, however, has a rather annoying downside. When firing the Golf Cannon, the player's screen will start shaking mildly but rapidly, enough to make long-range precision shooting challenging, with close-range fighting harder as well, since it may be hard to stay focused on your target with your view constantly shaking frantically.

Be careful! This variant is more dangerous than the Marine Biologist himself. His Golf Cannon has a very fast rate of fire, meaning that if he can land his shots, he will vanquish you in seconds. You need to be a super effective character to vanquish him safely enough. Although Golf Star is not an elemental, his weapon is a bit more annoying than he is. Make sure you come prepared. 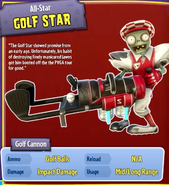 Golf Star in a game of Team Vanquish 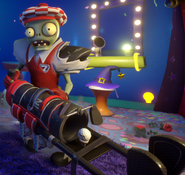