Gold Tiles are environment modifiers in Lost City and Modern Day in Plants vs. Zombies 2 that serve as a pure beneficial factors for both the player and the zombies. The amount of certain numbers are given initially on each level of the aforementioned world. The player can create another gold tile by using Gold Leaves.

For players, if plants are placed on them for the first time, the player will receive a normal sun, and then the tile will give normal sun every 20 seconds if the corresponding plant is still on that place. If a plant planted on a Gold Tile has been dug up, destroyed by the zombies, or moved from its current position, planting a new plant on it will continue generating sun after a certain amount of time.

For zombies, an Imp Porter is selected as the representative that manipulates Gold Tiles. In its case, Gold Tiles serve as station for him to deploy Basic, Conehead, and Buckethead versions of Adventurer Zombies by deploying its backpack into a tent.

Sprites for the Gold Tile

Gold Tiles in Big Wave Beach (only in Piñata Party)

A full lawn of Gold Tiles along with Red Stingers

Potato Mine on a Gold Tile 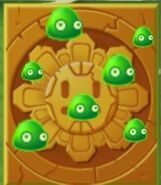 Dave's mold colonies on a Gold Tile (only in Piñata Party) 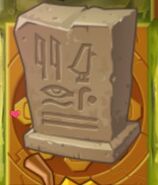 Ancient Egypt tombstone on a Gold Tile (only in the Epic Quest Aloe, Salut! and Premium Seeds - Aloe!)