Gold Magnets collect coins and diamonds for you.

Collects coins and diamonds for you

Beating Level 5-1 for $3000
"How did I end up here?" asks Gold Magnet. "I was on the fast track - corner office, full benefits, stock options. I was gonna be Vice President of Midwestern Operations. Now I'm here, on this lawn, in serious danger of being eaten to death. Ooh! A coin!"
Gold Magnet is an upgrade plant that appears in Plants vs. Zombies. It is the upgrade of Magnet-shroom. It costs $3000 to buy the seed packet from Crazy Dave's Twiddydinkies and costs 50 sun to plant, along with the 100 sun the Magnet-shroom costs.

Every five seconds, it collects up to five pieces of money on-screen, saving the player's time and allowing them to focus on attacking. It can attract both types of coins as well as diamonds.

Gold Magnet picks up a Coin or Diamond.

On iOS or Nintendo DS versions, Gold Magnet should rarely be used, as it is not as time-consuming and difficult to touch all the coins on-screen with the touchscreen compared to clicking them with a mouse. However, it can still come in handy, especially for simply automating the process.

Note: Gold Magnets do not have ferromagnetism, meaning that they cannot collect any other metal objects other than money. They do not behave like Magnet-shrooms at all, not taking away buckets, pogo sticks, ladders, and other metallic objects from zombies. Thus, the player should only plant a Gold Magnet if large volumes of money are being dropped, as they are otherwise useless due to the fact they cannot pick up metal objects used by zombies.

Due to their automatic money collection ability, Gold Magnets are best paired with groups of Marigolds, since the latter reliably generates money, with each Marigold generating one coin every 24 seconds. There are existing gold-farming strategies that exploit several Marigolds producing money while the enemy fruitlessly hammers away at the impenetrable outer walls, especially in Last Stand. Gold Magnets can also be useful in levels where large amounts of money are dropped by zombies, such as Survival: Endless. But otherwise, this plant has no offensive capabilities at all, and as such, it may be favorable to pick other plants over it in most levels.

It is not wise to plant a Coffee Bean on a Magnet-shroom before upgrading it, as Gold Magnet is not a mushroom and does not sleep in the daytime, thus wasting 75 sun.

It is also not recommended to use Gold Magnet on normal levels, as normally the player can go out of their way to collect the coins themselves.

Gold Magnet seed packet in the iOS and Android version

Gold Magnet in the Almanac 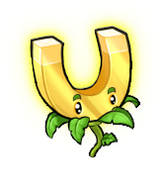 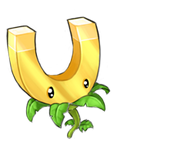 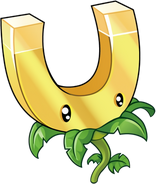 Gold Magnet in a Pumpkin

Gold Magnet in an Imitater Pumpkin 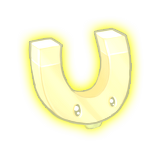 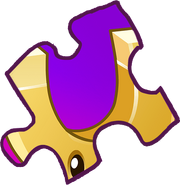 Gold Magnet in a advertisement, if you purchase it, you will get Moody-shroom. This is believed to be a mistake, in which Gold Magnet is misplaced.