Frenzy.
Shuffle three Going Viral cards into your deck.
Draw a card.
Though Zombies can't get ill, this plague is totally sick.
Going Viral is an event zombie card in Plants vs. Zombies Heroes and a member of the

Frenzy trait, shuffles 3 copies of itself into the zombie hero's deck, and draws a card.

It is based on a virus, a small, non-living piece of infecious agent that injects its DNA into cells and other organisms to unleash havoc.

Its name is a pun on the phrase "going viral," meaning something that has quickly spread, usually through the internet.

Its description makes a pun on the multiple meanings of the word "sick." In this case, it is utilizing the slang definition of "sick," meaning "great" or "amazing."

Though Zombies can't get ill, this plague is totally sick.

This card can essentially replace Coffee Zombie in most cases, as it does the same thing, with the added benefits of drawing a card, adding more of it into you deck, and costing 3

less. It can also be used as an alternative to Leftovers as it gives every zombie the

Frenzy trait, a free card, and reshuffles 3 of the same cards into the deck, but costs only 1 more brain than Leftovers. Since it is cheaper than Coffee Zombie, you can play a lot of zombies and then play this on turn 3 to give all zombies a boost and the

Because each usage makes 3 copies of it, it will likely draw this card multiple times until it fills up your deck, allowing you to boost your zombies by a lot. At the same time, however, you should also be careful about the fact that the more you play this trick, the higher your chances are of drawing this card which prevents you from playing other cards in the late game.

If you run out of zombies on the field, it can be difficult to draw more zombie cards as Going Viral has filled up your deck. So you must play this card very wisely and not repeatedly unless you can easily remove the plants or the opponent cannot destroy the zombies very easily.

In addition, since this is a trick, the player won't be able to use this when the plant hero played Brainana, while Coffee Zombie could have been used on the same turn. It can also be quite expensive in the early game, making it a huge sacrifice on whether to boost zombies and potentially have a bad late game draw or save brains for more important tricks like Weed Spray. This also includes plants that increase this card's cost like Forget-Me-Nuts and Dark Matter Dragonfruit.

Z-Mech has one of the best uses of this card, as he can get the field covered very quickly. This can work well when playing with groups of

Armored zombies so they survive longer and benefit with this trick. Combining this with a dancing deck, Z-Mech can deal a lot of damage very early if performed correctly. Other heroes may use this as a supporting trick like Monster Mash, as they do not have as many field-filling options as Z-Mech.

Rustbolt also works well with this card, because he can use cards like Fun-Dead Raiser, Regifting Zombie, and Leprechaun Imp to draw more cards, allowing you to get more of these in your hand faster. However, do not overuse this card as it lowers your chance to play new zombies.

Neptuna can use Gravestone zombies or tactics such as playing Mixed-Up Gravedigger to protect her zombies until the Zombie Tricks phase, with the exception of Grave Buster and the Winter Squash + Cool Bean combo, to allow her to easily play Going Viral and boost all her zombies easily.

Zombie King also works very well with this card, as he can turn weaker zombies into Knights of the Living Dead, allowing them to last on the field longer. However, when Zombie King turns other zombies into Knights of the Living Dead, it will erase all boosts Going Viral has given. Additionally, playing Zombology Teacher can benefit this as the cost of this card will be reduced to 2

This card can also be a great addition to a sports deck, since many sports zombies have high health and Team Mascot's ability can benefit from the

Frenzy trait. Furthermore, you can play Zombie Coach to stall until you can play Going Viral, or protect zombies affected by this trick, allowing them to tear through your opponent's defenses easily.

Due to this trick's nature, it is not recommended to bring other zombies that already have the

Frenzy trait as it just gives them a +1

If needed, you can play this card even if there are no zombies on the field to draw a card. However, avoid using this strategy as it also shuffles more Going Virals to the deck, which can be useless if you do not have any zombies.

Ancient Vimpire also works very well with this card (the more zombies on the field, the better), as Going Viral will give the zombies the

Frenzy trait, making it much easier to activate Ancient Vimpire's ability and thus, doing great damage to the plant hero. Only The Smash can use this combo normally.

This card can be very dangerous, because it can boost every zombie on the field and give them

Frenzy, and due to it being a trick, you cannot prevent it unless you play Brainana, Dark Matter Dragonfruit, or swarms of Forget-Me-Nuts, and the next best thing you can do is to punish your opponent with Sportacus or Black-Eyed Pea.

Therefore, your main goal will be to remove as many of the zombies on the field as many as possible, since your opponent's hand may be full of Going Viral cards due to its nature. Prioritize zombies that are dangerous with

Frenzy, such as Shieldcrusher Viking, Nurse Gargantuar, and Overstuffed Zombie. Damaging, instant-kill, or Bouncing cards are suitable for the job.

After you remove the biggest threats, you will then have to minimize the impact of the remaining zombies. While the boost is also dangerous, the

Frenzy trait is what you should suppress first. This can be easily done by Wing-Nut, but if you don't have Wing-Nut, using plants whose health exceeds the zombies' strength should also work. If the boosted zombies are too much for your plants to handle, Doom-Shroom will most likely destroy all or most of them, and lead to a defeat for the zombie hero. However, this is only available to the 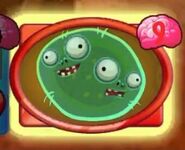 Going Viral on an advertisement for the Early Access Bundle

A notification about Going Viral

Going Viral on the advertisement for the Weekly Events

Going Viral on the advertisement for the Early Access Bundle

Going Viral being the featured card in the menu for the May 31st, 2017 Daily Challenge

Going Viral being the featured card in the menu for the June 3rd, 2017 Daily Challenge

Going Viral being the featured card in the menu for the June 15th, 2017 Daily Challenge

Going Viral being the featured card in the menu for the June 19th, 2017 Daily Challenge

Going Viral being the featured card for the May 26th, 2021 Daily Challenge