Special event
God of Wealth is a zombie in the Chinese version of Plants vs. Zombies 2. He originally could have been found in exclusive events that ran until February 24, 2015, along with Lion Dancer Zombie, where he only appeared in the final wave. God of Wealth could also have been found three times per day in a regular level. He immediately went to the second lane, and floated around from left to right. He attacked by firing gold pieces upward, which could rain down on a random plant. When killed, he dropped six gold coins and a red packet. This red packet, when opened, could give the player items, Puzzle Pieces for Big Wave Beach related plants, item Puzzle Pieces, costume Puzzle Pieces for Big Wave Beach plants, as well as Lord Bamboo.

He appeared again in Chinese New Year 2017's Endless event, but his appearance changed. He no longer attacks the plants, but instead dropped coins when damaged, and would only drop coins once dead. He can now continuously switch lanes, as well as move backwards and forwards. Once he reached the other side of the lawn, he would disappear.

Currently, he can now appear randomly in the Endless Challenge, keeping his appearance and behavior from his previous debut in 2017. 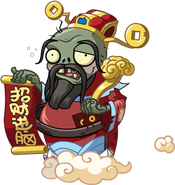 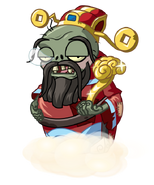 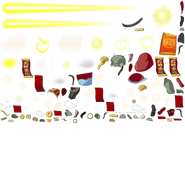 God of Wealth's sprites and textures

In a promotional picture 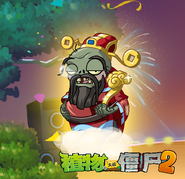 God of Wealth when defeated

God of Wealth back in 2017's Endless Challenge

God of Wealth getting hit by Monkeyfruit's staff 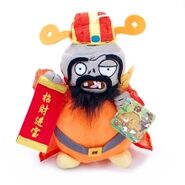 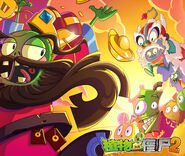 Retrieved from "https://plantsvszombies.fandom.com/wiki/God_of_Wealth?oldid=2361060"
Community content is available under CC-BY-SA unless otherwise noted.