For other uses, see Goatify (disambiguation).

N/A
The rudest and weirdest of Rose's ancient spells transforms Zombie foes into stinky old goats!
Goatify is the third ability for Rose in Plants vs. Zombies: Garden Warfare 2. When used, Rose will transform any zombie into a Stinky Goat for a short time. Goatify can turn more than one zombie into goats if they are standing together. Its alternate ability is the Psychedelic Goat. 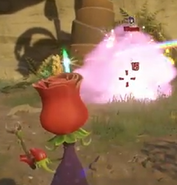 A Stinky Goat running away from Rose (animated)