The Goalie Star always gives his team a chance to win. Even off the ice, he tends to stand in front of fast moving projectiles.

His Ice Puck Cannon slows, and eventually freezes Plants right in their tracks!

Its primary weapon is the Ice Puck Cannon, which freezes plants after a certain amount of shots. It also fires quicker than the All-Star's Football Cannon, but it deals less damage. It also can fire the longest, being able to fire up to 15 seconds straight (with upgrades), which is a guaranteed kill to almost any plant.

The Cooler Cooler chills every puck before launch thus resulting in an overall heat reduction when firing.

Damage is increased from using harder and icier pucks.

This class is good to use if you frequently struggle with weapon overheating. While the Ice Puck Cannon suffers from a slight decrease in damage, its rate of fire is unaffected and it sports an unrivaled overheat time, being the slowest in the game, meaning that you can sustain fire for an incredible amount of time. The Goalie Star excels at laying down oppressive fire at choke-points and hallways as the longer overheat time means less pauses in your firing. Harassing fire is also an option as the sheer amount of pucks you can fire before overheating means you can (with proper aim and some luck) give Cacti some real problems. The Goalie Star's final perk is its freezing ability which allows you to immobilize plants if you hit them enough, allowing you and your allies to finish them off, Peashooters in particular which rely on speed to dodge incoming damage, will be totally helpless if frozen.

Goalie Stars can appear in Garden Ops. They can appear on the Special Wave "Goon Squad", and they can also appear alongside with regular All-Star zombies on CRAZY mode.

They can also appear on Super Yeti Waves too. Goalie Stars will back up the Yeti bosses alongside with Arctic Troopers, AC Perries and Yeti Imps. 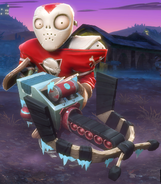 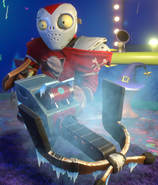 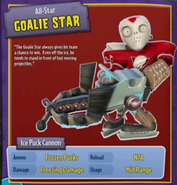 A Goalie Star being customized

Two Goalie Stars in a parody 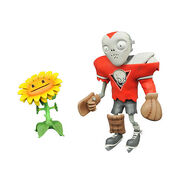 A Goalie Star figure with a Sunflower figure 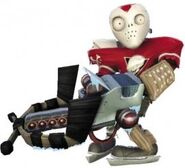