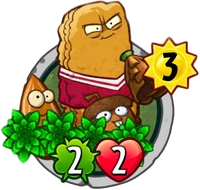 .
"GROW-Nuts! THROW-Nuts! When we get big we GO-Nuts! Goooooooo PLANTS!"
Go-Nuts are an event plant card in Plants vs. Zombies Heroes and a member of the

They are based on cheerleaders, people who participate in cheerleading, an act of cheering for their team as a form of encouragement.

Their design includes a Plants vs. Zombies 2 Tall-nut, an almond (Prunus dulcis), and a Tornacorn. They are depicted to resemble a cheerleading squad with their leaves and dresses, suggesting that "Go-Nuts" is used as a cheerleading phrase here to boost the morale of other plants in the game. Their description is also written as their cheerleading line, following the aforementioned theme of moral support.

Statwise, Go-Nuts has low stats for their cost. However, they can make Team-Up plants hit exceptionally hard thanks to their ability. Since they have Team-Up themselves, you can play any plant in front of them to prevent zombie attacks from destroying Go-Nuts. Being in the Smarty class, a bean deck can be a great deck for Go-Nuts as most beans, like Admiral Navy Bean, have Team-Up. All Smarty heroes can use this plant with Laser Cattail, boosting him by +2

from both their abilities when you play a Team-Up plant on Laser Cattail's lane.

Go-Nuts' weakness is their inability to boost health, meaning that while your squad of Team-Up plants will hit hard, they won't excel very much at surviving combat, supported by the fact that many Team-Up plants in the Smarty class have low health. While Citron, Beta-Carrotina, and Green Shadow can easily protect Go-Nuts or boost their stats (not to mention the former two have high-health Team-Up plants too), Rose and Nightcap will have to resort to heavy destruction.

You can treat this plant as Zookeeper that benefits Team-Up plants. Since they do have low health, damaging cards like Bungee Plumber can destroy them with ease. Once a ton of Team-Up plants are played, you can use Rocket Science or Cut Down to Size to pick on the biggest threats. Or, you can play mass-damaging cards like The Chickening, Barrel of Deadbeards, Gas Giant, or Fireworks Zombie, but this strategy is ineffective if your opponent starts boosting the Team-Up Plants, unless Zombot Sharktronic Sub is also on the field. And if you are against Citron or Beta-Carrotina, be sure to pack instant kills to destroy any Wall-Nuts that can protect Go-Nuts and your opponent.