Gloom-shrooms fire heavy fumes in an area around them.

Between playing Levels 4-4 and 4-5 for $7500
Sleeps during the day
"I've always enjoyed releasing heavy fumes," says Gloom Shroom. "I know a lot of people aren't cool with that. They say it's rude or that it smells bad. All I can say is, would you rather have your brain eaten by zombies?"
Gloom-shroom is an upgrade plant that only appears in Plants vs. Zombies. It fires fumes in all directions around it that deal heavy damage to all zombies nearby, but it only has a very short range of the tiles that surround it. It can be purchased from Crazy Dave's Twiddydinkies for $7500 and is an upgrade for the Fume-shroom. It can be unlocked in the shop between playing Levels 4-4 and 4-5 and is useful in Last Stand and other swarming levels, like Bobsled Bonanza.

The Gloom-shroom causes normal damage with every shot, attacks for a second and stops for half a second. While its range is the surrounding patches in all eight directions, the attacking speed is very fast. In fact, it shoots four times in the time that a zombie travels one square of yard. It can take down a Conehead Zombie in an adjacent lane, though it can barely do enough damage to do so by itself. The heavy fumes can even pass through a Screen Door Zombie's screen door just like the Fume-shroom. They are just like a short-ranged Gatling Pea that can attack at three lanes and damage all zombies in that range like the Fume-shroom.

Note that they can hit zombies that are eating Wall-nuts on any of the squares in its range, but not Tall-nuts (unless a Pole Vaulting Zombie, Pogo Zombie, or Dolphin Rider Zombie jumps into it). This plant is essential to surviving large numbers of flags in Survival: Endless. It is also a key solution in the completion of Wall-Not Attack.

The Gloom-shroom deals four damage per second to any given target in its range, which is the same amount of damage a Gatling Pea deals. Its fumes can also hit every single target in its range, like the Fume-shroom, even if they have shields. As before, however, it does not have as much range (short range).

One tactic for Pool and Survival: Endless levels is to build a two by three area of Gloom-shrooms in the right-hand side of the pool, all covered by Pumpkins. These will handle pool zombies as well as those in rows two and five. This strategy has the side effect of leaving zombies in rows one and six mostly unscathed, so although these can generally be handled with Cob Cannon shells or consumable plants, such as the Jalapeno, a better idea is to put Gloom-shrooms in the fifth and sixth columns in rows two and five, plus using Fume-shrooms in rows one and six in the fourth and fifth columns. Optionally, Garlic can be placed in rows one and six to funnel zombies into the Gloom-shroom's line of fire (although this obviously will not work against Gargantuars, Catapult Zombies and Zombonis), while a Spikeweed or Spikerock can be placed in rows two and four or five.

Another effective use is a row of Gloom-shrooms in rows two and four or five, with two Garlic at the very end. All land zombies will be moved to rows one and six and be annihilated. Snorkel Zombies and Dolphin Rider Zombies will make it necessary to add a two columns of Pumpkins on Lily Pads in the pool to allow time for the Gloom-shrooms to destroy them. This strategy is perfect for the mini-game Last Stand, since it can handle all of the zombies encountered. Their effectiveness is hampered by their short range, which makes them vulnerable to Gargantuars, Zombonis, and Catapult Zombies when planted on land, which will cause them to be smashed if said zombies reach it.

They can also be used in Survival: Endless (in the column second furthest to the left, on land) in order to dispose of Digger Zombies (and Imps), as there is generally not enough room for Split Pea. Do not place with Tall-nut because it will not attack.

Another strategy includes planting two rows of Sunflowers  in the day mode. Once you get enough 25 sun, plant a Potato Mine at the back of the row with  the first zombie. By then, you should have at least two Sunflowers. Start to save up for a lot of sun after you cover the third row with Peashooters. Once a Buckethead walks in, plant a Fume-shroom. Once it gets close, plant a Gloom-shroom on top of it a and wake it up with a Coffee Bean. Then, just keep planting Fume-shroom and Gloom-shrooms. Once you have a full column, plant Spikeweeds in front of the Gloom-shrooms and if you still have room for other plants, bring in the Spikerocks.

This plant is ideal for mini-games where the zombies are in very high numbers or have high toughness. Use it for mini-games like ZomBotany and ZomBotany 2, because Peashooter Zombies and Gatling Pea Zombies could kill your regular plants without being near. It is also recommended for Last Stand, as the huge mobs can overrun other plants. Keep in mind that using three of these in rows two and five costs 1500 sun (not factoring in Garlics or other plants). A common Gloom-shroom related strategy is called the Gloomwalk, which involves Garlics funneling down zombies into two or three lanes with the other lanes being full of Gloom-shrooms. Since all zombies that eat are forced to pass through a narrow bottleneck (formed by the Garlics diverting them to the same lane) while being bunched up together, the Gloom-shrooms are able to dispose them relatively easily. Be mindful, however, that a stray Jack-in-the-Box Zombie can ruin this setup if left to his own devices, as its explosion can take out plants on adjacent lanes as well. 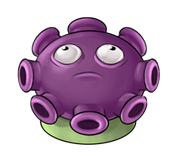 Gloom-shroom seed packet in the iOS and Android versions 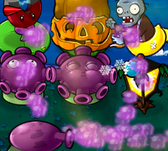 A lawn full of Gloom-shrooms 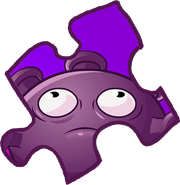 Gloom-shroom's Puzzle Piece
Add a photo to this gallery

A Gloom-shroom plush
Add a photo to this gallery

Retrieved from "https://plantsvszombies.fandom.com/wiki/Gloom-shroom_(PvZ)?oldid=2360525"
Community content is available under CC-BY-SA unless otherwise noted.