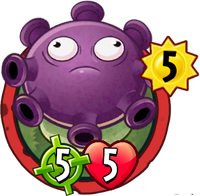 For other uses, see Gloom-shroom (disambiguation).

Mushroom Evolution: Do 3 damage to Zombies here and next door.
Some see him as depressed, but he's got a lot of sides.
Gloom-Shroom is a colossal legendary plant card in Plants vs. Zombies Heroes and a member of the

Bullseye trait, and his Mushroom Evolution ability does 3 damage to zombies on his lane and the lanes adjacent to him.

He is based on the plant in Plants vs. Zombies with the same name and appearance.

His Evolution ability is a reference to him being an upgrade plant in Plants vs. Zombies.

His description references the sad-looking expression on his face as well as the word "gloom" in his name, and the fact that, in Plants vs. Zombies, he attacks in multiple lanes.

Some see him as depressed, but he's got a lot of sides.

On top of his average stats and the

Bullseye trait, Gloom-Shroom has a very useful and handy ability. Just play him on any mushroom and he will activate it, destroying all zombies with 3

or less on his lane and the lanes next to him, opening up an opportunity for your plants to hit your opponent. Therefore, Gloom-Shroom's ideal placement is in the middle of a cluster of threatening low-health zombies to punish them.

plant with no traits or abilities, so you will not miss out on much. However, keep in mind that you should never bring Button Mushrooms into your deck just for Gloom-Shroom's evolution ability, and relying on More Spore is a better way to get Button Mushrooms.

Don't use zombies with 3

or less when you know your opponent has this since if they have another mushroom on the field, they can play this to destroy or weaken your zombies. Instead, destroy him with tricks or zombies with 5

or more. You can also use Teleportation Zombie or Teleport to play zombies without them getting hurt by Gloom-Shroom's ability. Tricks like Rocket Science and Locust Swarm can destroy him easily.

You can also use Zombie Coach if the field is full of sports zombies to negate his ability. You can also use Mixed-Up Gravedigger for a similar effect, but be careful, because your opponent may have Grave Buster or other anti-gravestone cards.

If you have 5 health or less against a Kabloom hero, always be careful of this as this can easily land a finishing blow if you have no way of countering this with tricks or other abilities. Surprise Gargantuar can be a good choice here as he can move to block Gloom-Shroom. Likewise, Rodeo Gargantuar can be an equally good choice, although it can be more easily stopped as the plant hero just has to play a plant in front of the gravestone and all other zombies.

Retrieved from "https://plantsvszombies.fandom.com/wiki/Gloom-Shroom_(PvZH)?oldid=2331244"
Community content is available under CC-BY-SA unless otherwise noted.