The rainbow given off by Glitter Zombie isn't disco magic. It's fumes given off by her daily beauty regimen of a faceful of defective glitter, five cans of weapons-grade hairspray, and a glob of expired vanilla yogurt.

Glitter Zombie is a Rainbow Glitz minion zombie in Plants vs. Zombies 3. She creates rainbows behind her that make other zombies invulnerable.

Mega-Glitter Zombie looks identical to her normal counterpart, except for the fact that she is much bigger. In addition, she has much more health, moves much more slowly, and shields zombies in three lanes instead of only one.

She is based on the zombie from Plants vs. Zombies 2 with the same name.

Glitter Zombie's ability nullifies the effect of Piercing plants, so it is heavily recommended that you don't take them with you to the battle. Because Glitter Zombie has Electric as her damage type, Earthy plants are extra effective against her. Keep that in mind when picking your plants.

Mega-Glitter Zombie, having much more health than her normal counterpart, is therefore much harder to defeat. In addition, she protects zombies in lanes next door to her own, which can be very annoying. As such, you'll want to deal with her as soon as possible. Using Squash is a good choice because he can instantly kill her if leveled up enough, dealing with her very quickly.

Glitter Zombie's icon in the Pre-Alpha 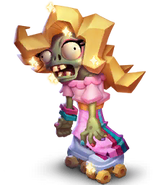