(cannot be crushed and will continue attacking)

(shrunken rainbow trails only cover one tile behind)

(delays it, causing other zombies to be vulerable)

(forces it to eat the gum)

(teleports her to the beginning, exposing all the zombies that she is protecting)

Neon Mixtape Tour - Day 6
Glitter Zombie inspires zombies everywhere to boogie their brains out, whether it's just one moment or maybe forever, or at least until the lights come on and they're kicking everybody out.

Glitter Zombie is the sixth zombie encountered in Neon Mixtape Tour in Plants vs. Zombies 2 (the fifth in the Chinese version). When the pop jam plays, she will emit a 1x3 rainbow trail behind herself, protecting all zombies in that area from incoming damage until she is killed or for the duration of the jam. The rainbow also negates negative effects from plants such as Kernel-pult's butter, Stallia's perfume, and Iceberg Lettuce's freezing effect. She will also kill any plants instantly when the pop jam is playing and when she encounters them, except Spikeweed, Spikerock, Cactus, and Celery Stalker when hiding. However, the rainbow trail cannot protect Zombot Multi-stage Masher, and the zombie herself. She also moves a bit faster than a Basic Zombie.

She may be a reference to the 1980 movie Xanadu, which features roller skating muses with rainbow trails.

She may also be based on the "Roller Zombie" from Plants vs. Zombies: Official Guide to Protecting Your Brains.

Glitter Zombie has blonde hair growing down to the back and a right fringe partially covering her right eye. She wears makeup, as seen, three black strokes around her eyes. She wears a tucked-in pink shirt where its sleeves end midway up the shoulders. She also wears something that appears to be a corset and under, a long pink skirt with striped lines colored magenta, blue, and purple respectively. She also wears a pair of white roller skates with yellow wheels and above, puffy magenta socks. Finally, she has two large bracelets on her right arm, blue and magenta respectively.

Glitter Zombie inspires zombies everywhere to boogie their brains out, whether it's just one moment or maybe forever, or at least until the lights come on and they're kicking everybody out.

Despite being weak in terms of health, her ability to protect zombies behind her, as well as her ability to instant-kill plants by rolling over them during the pop jam, can cause this zombie to become very problematic if you do not have the right defenses. Normally, she is not hard to deal with and does not cause much of a problem as she rarely gets far enough into your lawn to quickly cause serious issues to your defense, due to the speed decrease by 50% for every zombie in this jam. However, do not underestimate her as she can be a problem if she appears early in undefended lanes or is left alive for long enough as all zombies behind her are invincible to almost all attacks, leaving the other zombies to quickly overwhelm defenses when she is destroyed. The main problem is that she can assist a Hair Metal Gargantuar behind her into your further defenses, which makes the Hair Metal Gargantuar invincible until she dies. Also, take caution if groups of Breakdancer Zombies appear in her lane, especially if pop and rap jams suddenly shift back and forth in a quick session such as some later levels in Greatest Hits, allowing her to crush the plants without moving towards them. 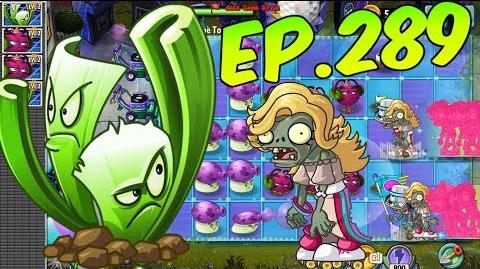