Wears a helmet. Throws an imp AND a net. Just a real piece of work.

Throws Roman Imp and a net when damaged

(Can instantly defeat it)

(Blows away the Roman Imp mid-air)

(Can push back the Roman Imp)

(Defeats the imp before it can be thrown and weakens him)

Wears a helmet. Throws an imp AND a net. Just a real piece of work.

He's got a column and he's not afraid to use it.

Gladiator Gargantuar is a very dangerous zombie that can easily mess up your defenses. Not only does he have a net, but also throws a Roman Imp that has more health than other Imps.

Try to select strong plants when you encounter him. You can try to stall him as much as you can with plants such as Gumnut and Primal Wall-nut, which can easily stall him. If he appears in a level where there are no Healer Zombies, try hypnotizing him with Caulipower or Hypno-shroom. This is not as easy when Healer Zombies appear since they can remove hypnosis.

Bombard-mint family plants can defeat him quickly since these plants can deal high damage to him and will only take 3 hits to wipe him out, but this can cause him to throw the Roman Imp which can cause damage to your defense. Another way to easily defeat him is by shrinking him, which reduces his speed and health so that he can easily be defeated by the Squash.

Avoid doing Spicy or Extra Hot difficulty if you have weak or low-level plans in Penny's Pursuit since his health increases with difficulty. 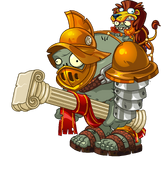 Gladiator Gargantuar in an advertisement of Gladiator's Plant Bundle 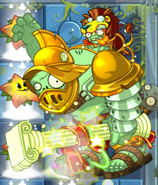 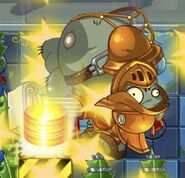 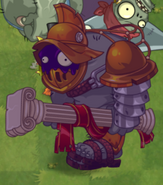 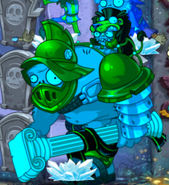 The net after Roman Imp landed 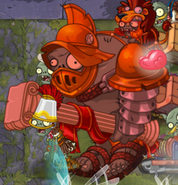 Gladiator Gargantuar in an advertisement of Mulch Madness

Gladiator Gargantuar in an advertisement of Mulch Madness

Gladiator Gargantuar in an advertisement of Mulch Madness Grand Finale