For the version in Plants vs. Zombies, see Giga-gargantuar. For other uses, see Gargantuar (disambiguation).

Giga Gargantuar is a boss zombie in the Garden Ops mode in Plants vs. Zombies: Garden Warfare and Plants vs. Zombies: Garden Warfare 2. It is a more powerful form of the Gargantuar. Like the Gargantuar, the Giga Gargantuar is exceedingly troublesome when support classes aren't available and with a big amount of other zombies and zombie bosses. He is similar to the regular Gargantuar, but he wears a shredded black suit, black sunglasses, a heart tattoo engraved with "IMP," and has red eyes. 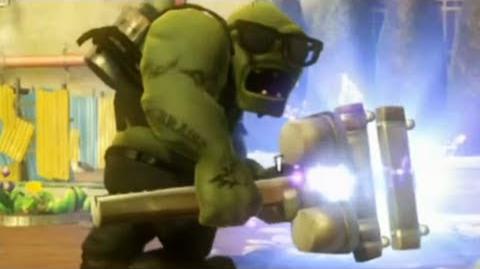 Retrieved from "https://plantsvszombies.fandom.com/wiki/Giga_Gargantuar_(Boss)?oldid=1035448"
Community content is available under CC-BY-SA unless otherwise noted.