For the version in Plants vs. Zombies: Garden Warfare, see Giga Gargantuar (Boss).
For other uses, see Gargantuar (disambiguation).

It has double health of a regular Gargantuar, allowing it to absorb 6000 damage per shot or four instant kills. You should try to select as many instant kills, such as the Cherry Bomb, Jalapeno, Squash, and Doom-shroom with a Coffee Bean, as you can. The Cob Cannon is also a good plant to have in your arsenal.

After two instant kills or 3000 damage per shot, it will hurl an Imp into your defenses, unless it is already halfway into your lawn. Sometimes, a Giga-gargantuar will appear before a normal Gargantuar appears. The Imp however, can be very destructive if you control Cob Cannons, as they cannot be protected by Pumpkin.

Another useful strategy, although unconventional, is to use Puff-shroom, Imitater Puff-shroom and Winter Melons. By placing a Puff-shroom in front of a slowed Giga-gargantuar, and immediately placing an Imitater Puff-shroom once the previous one is destroyed, the Giga-gargantuar will be unable to move at all - or at least move incredibly slowly. This strategy is great because although it does no damage to the Giga-gargantuar by itself, it leaves plenty of time for your other plants to take it down, for zero cost. Thus it is best employed when you have achieved an optimal/self-sustaining team layout where you no longer need to add anything to your team. This also works against regular Gargantuar, though it is not as dangerous as this zombie. 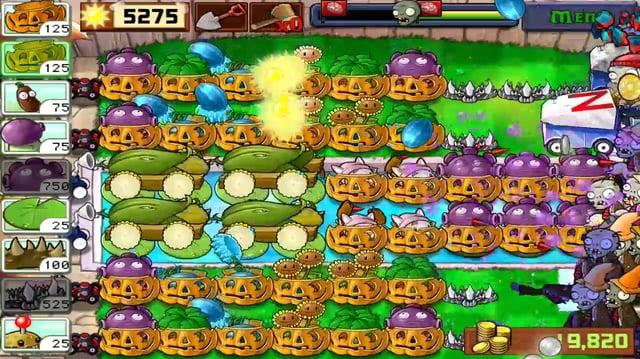 Giga-gargantuar with Imp and patches

A Giga-gargantuar in Survival: Endless in the Pool

Giga-gargantuar about to throw an Imp

A Giga-gargantuar tossing his Imp

A second icon with Zombie and Pole Vaulting Zombie on it

A third icon with Chomper and Super Chomper on it 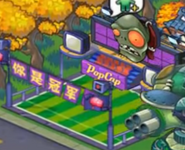