For a similar looking zombie in Plants vs. Zombies: Garden Warfare, see Blitzer.

A Football Zombie with the health of a Gargantuar.

The Giga-Football Zombie is identical to the standard Football Zombie in both appearance and ability, but has the exact health of a Gargantuar and, in the web version only, has spikes on its shoulder plate.

The Giga-Football Zombie absorbs 3000 damage and its appearance changes upon absorbing 940, 1880, 2800 damage (by this point, the black football helmet is destroyed) before dying at 3000 damage taken. It does not lose its arm until it dies.

Like the Football Zombie, Magnet-shroom is able to remove his helmet to decrease the amount of damage needed to defeat him, though this is only possible in Plants vs. Zombies Social Edition.

A good choice against him would be the Chomper as he kills him in one bite unlike other instant kills. Wall-nuts would be okay, but they would probably be eaten by the time the Giga-Football Zombie dies, so if you want to use them, you should be sure to plant them close to the right of the screen. Using a Squash on them will deal high damage, though it cannot kill them at full health. 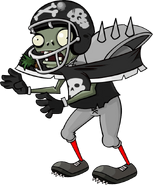 Some Giga-Football Zombies in the online version of Survival: Endless

A part of his body

His lower left arm while eating

His upper left arm with bone

His right foot
Add a photo to this gallery 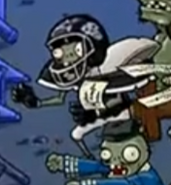 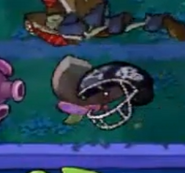 Retrieved from "https://plantsvszombies.fandom.com/wiki/Giga-Football_Zombie?oldid=2379956"
Community content is available under CC-BY-SA unless otherwise noted.