When zombies were handing out costumes, Ghost Zombie got there late, and all that was left was a bedsheet. But he has the last laugh. After one unlife as a zombie, he gets another one as a ghost!

Ghost Zombie is an Immorticia minion zombie in Plants vs. Zombies 3. He acts like a Browncoat Zombie, except when destroyed he summons a Flying version of himself, similarly to how Zom-Blobs spawn Zom-Blots.

This zombie initially acts like a Browncoat Zombie, albeit with the

Chilling damage type; however, this zombie summons a flying zombie when it gets destroyed, so be sure to use Air-Guard plants against it. Flak Seed is an excellent choice against this zombie; not only is it an Air-Guard plant, but its

Electric damage type is strong against the Ghost Zombie's

Chilling damage type. Lightning Reed can also work, being both an Air-Guard plant and an

Electric type, but because it does much less damage it is recommended to only use Lightning Reed if there is an overwhelmingly large number of Ghost Zombies on the screen. 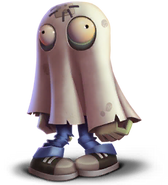