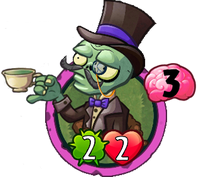 For the version in the Chinese version of Plants vs. Zombies 2, see Gentleman Zombie.

Start of Tricks: You get +2

this turn.
Life comes and goes, but proper manners are forever.
Gentleman Zombie is a premium rare zombie card in Plants vs. Zombies Heroes and a member of the

. He has the Gravestone trait, and his ability gives the zombie hero +2

at the start of every Zombie Tricks phase, starting from the turn he is played. This ability stacks with each Gentleman Zombie on the field and persists until all Gentleman Zombies are removed from the field. His closest plant counterparts are Twin Sunflower and Sunnier-Shroom.

Life comes and goes, but proper manners are forever.

Gentleman Zombie's ability provides you extra brains for you to play tricks and environments, making him a very important zombie in a trick/environment deck (although he is less important in an environment deck since environments are less spammable than tricks), and he can be really devastating if used correctly.

For example, you can unleash lots of expensive late-game cards earlier with enough Gentleman Zombies alive: Immorticia is a good example, as she has lots of lethal late-game cards like Maniacal Laugh and Zombot 1000 (via Teleport or Teleportation Zombie ). Even outside of hero-specific combos, he goes well with Mad Chemist, Paparazzi Zombie, Trick-or-Treater, and Trickster combined due to their abilities being trick-related; Mad Chemist and Trick-or-Treater provide you with tricks to play, while Trickster and Paparazzi Zombie benefit from playing those tricks.

Gentleman Zombie can also alleviate Brainana's, Forget-Me-Nuts', and Dark Matter Dragonfruit's ability by either giving back brains that were lost, or make up for the increased cost of tricks.

However, this ability is trick and environment-exclusive, so Gentleman Zombie is not a good pick if your deck doesn't focus much on them. Also, his stats are rather middling, with only 2

, meaning he can be destroyed easily; while his Gravestone trait helps for a turn, it won't be long until Gentleman Zombie is targeted by a plant or a trick that can remove him at once.

As Super Brainz or Huge-Gigantacus, you can simply give Gentleman Zombie a miniature boost by having Headstone Carver on the field due to him having the Gravestone trait, or move him out of the way of dangerous plants onto unoccupied lanes with Smoke Bomb or Carried Away. As Professor Brainstorm you can also take advantage of his Gravestone trait with Grave Robber. And as Rustbolt or Immorticia, you can easily boost Gentleman Zombie so that he becomes harder to take down.

Gentleman Zombie doesn't hit hard or survive many attacks, so it should be easy to destroy him after he comes out of his gravestone, as there are many cheap cards like Banana Bomb and Potato Mine that can do the job. However, beware of boosting or instant-kill cards.

You may also use anti-trick plants to deter your opponent from playing tricks. Note that, however, some plants' abilities will be less effective with Gentleman Zombie supplying brains.