Start of Tricks: This gets
+1

if there's a Zombie next door.
Pickled Zombie is the best kind of Zombie.
Genetic Experiment is a galactic super-rare zombie card in Plants vs. Zombies Heroes and a member of the

at the start of the Zombie Tricks phase if there is a zombie on either of the lanes adjacent to it.

Pickled Zombie is the best kind of Zombie.

This zombie is really useful on turn 2 and later as it can get a small boost when there is a zombie adjacent to it. To keep its ability longer, using

Armored zombies like Conehead or Buckethead, or shielded zombies like Trash Can Zombie can most likely activate it ability each turn, similar to Pea Pod. However, due to the fact this zombie starts out with very low health, it is recommended to use health-boosting cards like Camel Crossing to make it survive longer and get stronger over time. Escape through Time can also be useful as you can protect this zombie for a turn when a strong plant is about to destroy it. However, stat-lowering or instant-kill cards can still destroy him.

As a benefit, this zombie works well with Rustbolt with its science synergy to increase its strength with Zombot Drone Engineer, make it do bonus attacks with Gadget Scientist, or transform Interdimensional Zombie. Rustbolt can also play Parasol Zombie to protect it from damaging, stat-lowering, or instant-kill tricks.

If you are playing as Neptuna or The Smash, you can boost it on turn 1 by playing a Goat or Swabbie next to it due to their free cost, meaning that you can have a 3

Genetic Experiment and a 1

Swabbie on turn 1 as long as the plant hero doesn't get rid of the Genetic Experiment or Swabbie/Goat next to it before the Zombie Tricks phase.

each turn. To prevent it from activating its ability, you can aim at destroying zombies that are next to it. If this zombie is played in the early rounds, Berry Blast or Whack-a-Zombie can destroy it easily. If this zombie goes out of control, instant-kill tricks like Shamrocket or Squash is your best solution. You can also Bounce this zombie to remove its boosts completely or use Transmogrify to remove its boosts and turn it to a potentially weaker zombie. Even if it transforms into another Genetic Experiment, a 2

if its ability activates, assuming your opponent doesn't boost it further) zombie shouldn't be much of an issue, unless you let it stay over the current turn.

It also helps to move zombies away from Genetic Experiment with cards like Banana Peel. 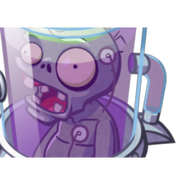 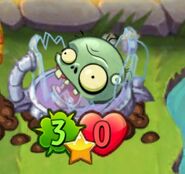 Genetic Experiment with the

Genetic Experiment with a star icon on its strength