The General Supremo was promoted to lead the charge against the Plants. Although, he forgot the detailed battle plans at the office so he's using a more agile process to fight the Plants instead - i.e. making it all up.

General Supremo can fire without reloading! However, he does have a tendency to overheat...

The primary weapon of the General Supremo is the Golden Gatling. The facts below apply to a fully upgraded weapon.

Weapon coated in a heat resistant coating, offering a reduction to overheat downtime.

Zomboss Special Gold Ammo was a gift from Zomboss himself after winning the Battle of What-Not.

This variant is essentially an All-Star put into a Foot Soldier. For people who use Foot Soldiers and excel at overheating weapons, this variant is the one for you. The main advantage General Supremo has over All-Star variants is the abilities of the Foot Soldier, especially Rocket Jump, which helps you get to high vantage points and snipe effectively. The Golden Gatling is effective at close range so this encourages the player to attack plants head-on instead of attacking them from vantage points or from behind cover. When firing the Golden Gatling, spray and pray at close range while aiming at your target, yet try not to fire for longer than four to five seconds to avoid overheating as overheating the weapon will result in a four-second cooldown, which is longer than any reload and can easily become your doom in heated firefight. Instead, try to take short pauses between each burst, yet, if an enemy needs to vanquished urgently, just fire freely. General Supremo is notably an ideal character for assaulting and capturing gardens in Gardens & Graveyards as his large clip size allows him to hold off plants for longer, his overheat mechanism means that if players take short pauses between each burst, they can maintain a steady stream of pellets at their enemies along with keeping the bloom low.

The Z-1 Assault blaster has a moderately-sized clip, a mediocre rate of fire and is moderately effective at any range, yet excels at mid range while the Golden Gatling has a large-sized clip, a high rate of fire, yet is only effective at mid and close range. This means the players using General Supremo should try to avoid long-range combat since the Golden Gatling's immense bullet spread means that such engagements rarely end in your favor. It is worth noting that the bullet spread's effect is gradual, meaning if you are attacked by a drone, the Golden Gatling, with controlled trigger pulls, should have enough accuracy to get the job done. 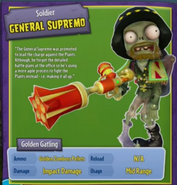 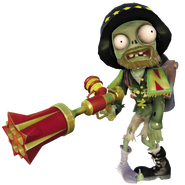 Retrieved from "https://plantsvszombies.fandom.com/wiki/General_Supremo?oldid=2339004"
Community content is available under CC-BY-SA unless otherwise noted.