For other uses, see Diamond (disambiguation).

Gems are items in Plants vs. Zombies 2 used for boosting plants in the seed selection screen, purchasing gem premium plants, sprouts, Piñatas for upgrading plants, and some plant costumes in the store. They can also be used as an alternative way to immediately grow plants and purchase extra pots in Zen Garden.

How to obtain gems

The following plants are always in the store, all costing 100 gems:

The following plants are occasionally in the store, all costing 100 gems:

The following plants are normally in-app purchases (iAPs) or seed packet premium plants, but have been put on sale for gems at one point:

Starting in 2021, the pinata of this Power Mint is occasionally in the store (as during future Arena seasons featuring solar plants, and in "Improve-mint" events), and it costs 20 gems:

It is highly advised to use gems to buy premium plants, as some of them are available for a limited time only and you will not be able to buy them after the deadline. When you have bought all current gem premium plants, you can try to get more gems to be able to unlock new pots in the Zen Garden or for future plants.

It is best not to spend gems in the Zen Garden, sprouts, nor for costumes, as you can simply set your device's clock ahead several hours or use Bernie the Bee to bypass waiting; sprouts are overpriced and are dropped commonly in-game, and costumes do nothing except visually decorating plants, making it worthless. In addition, most costumes can be unlocked in Piñata Parties and Mystery Gift Boxes, although some are store-exclusive.

If a gem premium plant is not available for a limited time, there is a chance that the price will lower and if you spend your gems early and the price lowers afterward, your gems will not be refunded. If you plan to not lose excessive amounts of gems, you can wait until the price of the plant in question gets cheaper.

Another good usage of gems is to get piñatas for upgrading plants. These can make even the weakest plants powerhouses and can make some of the hardest levels incredibly easy. Note that these can be bought anytime and that limited-time plants should be prioritized (unless you don't need them for your collection). Try and get to a decent league (such as Iron and above) in Arena, and then buy the '100' gem piñatas in the store, as the league bonuses are very helpful. Using gems to retain winning streaks in Arena is not recommended, since the reward streak resets after every 7 consecutive wins. The price to retain increases by 10 gems with every loss.

Gems should be spent. Many players will save them up; this is correct, but remember - you can obtain 21 gems with ease each day, with a maximum of 27 if you have more than 4 hours of time. Many offers/plants will stay for a week, as they are likely to be featured in Arena. This way, 7 x 21 = 147 gems in the week, maximum 189. Plants won't cost more than 100, usually, so buying them will be quite easy. Also, you would probably have gotten some gem rewards from last week's Arena tournament. Therefore, you should spend gems, but save 10-30.

The button to use gems to speed up the plant

Pay gems for an extra space in the Zen Garden

Getting gems in a Piñata Party

The gem icon for the counter

A gem on its tab in the store 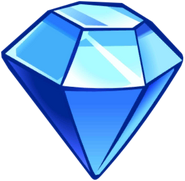 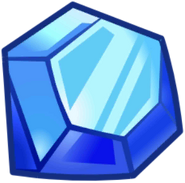 Yet another single gem

HD 20 gems icon on the store 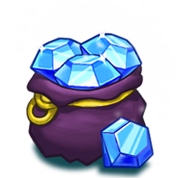 HD 50 gems icon in the store 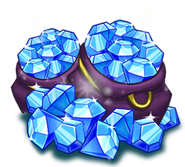 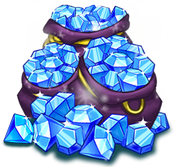 An advertisement for a gem sale

Sprite of gems with various items

An advertisement showing how to earn gems through Travel Log

An ad for gems, as seen in the store

Gems in the Starter Bundle advertisement

Gems in another Starter Bundle advertisement

Gems in an advertisement of gemium deals

250 Gems Bundle in the new store