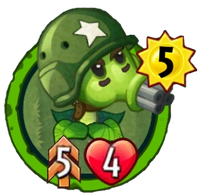 Pea Evolution: This does a Bonus Attack.
There is no problem that cannot be solved by more peas.
Gatling Pea is a colossal legendary plant card in Plants vs. Zombies Heroes and a member of the

Double Strike trait, and its Pea Evolution ability makes it do a bonus attack.

Its Evolution ability alludes to how it is an upgrade plant in Plants vs. Zombies, with its

Double Strike trait alluding to how it is an upgrade of the Repeater, who also has the

Double Strike trait in its Plants vs. Zombies Heroes appearance.

Its description may be an allusion a stereotype of attrition wars, whereas the only way to win is to put in more resources than the opponent.

There is no problem that cannot be solved by more peas.

By itself, Gatling Pea should be treated like a more powerful version of Repeater. Just like Repeater, due to its

Double Strike trait, it will perform a bonus attack if it survives combat, essentially allowing it to do double damage or attack your opponent after destroying a zombie. However, the main distinction for Gatling Pea is that it can be Evolved on another pea plant, causing Gatling Pea to perform a bonus attack upon being played which can help either remove a zombie with 5

or less leaving one of your opponent's lanes open, or weaken a high-health zombie which can then be taken out more easily during combat.

Double Strike plants, increasing its strength is always a good idea as it only makes the fact it can do at least two attacks in a turn more potent. Being a pea plant, this can easily be done with Torchwood, becoming a 7

Double Strike plant, or The Podfather, which makes Gatling Pea stronger when played, making it a 7

. This can allow Gatling Pea to do up to 14 damage that turn. If you count its Evolution ability, you can do 21 damage, which can potentially defeat a full health opponent if they don't block its attacks.

If you want to look for an alternative, Grape Power is a very worthwhile choice as it bumps its strength to a massive 10, which with

Double Strike will do 20 damage, which is enough to defeat a full-health opponent in one turn.

Pea Patch also makes an effective candidate for Evolution, as not only is it a Pea plant, which will activate Gatling Pea's evolution ability, but it is also a Fusion' card, meaning that on top of being able to do a bonus attack, Gatling Pea will also gain +2

due to its Fusion ability.

It is recommended to never play this plant at all if Bonus Track Buckethead is on the field, because he will prevent bonus attacks from happening. If that is the case, you must take him out first.

Gatling Pea should be treated like a Repeater with higher stats; if left alone, it can do a lot of damage in its lane, potentially dishing out at least 10 damage there. It can be especially dangerous in tandem with boosting cards like Torchwood or The Podfather.

In order to try and mitigate or prevent its Evolution ability, you can try to ensure there isn't another pea for it to Evolve on or play a Gravestone zombie in front of any possible pea plant it may Evolve on. A cheap zombie with the

Deadly trait is also recommended, but you should beware that none of them can take Gatling Pea's Evolution ability with the exception of Smelly Zombie (who hides in a gravestone) and thus should be played after the Evolution ability has activated.

Many tricks such as Locust Swarm, B-flat, Exploding Fruitcake, Cakesplosion, Rocket Science or Cut Down to Size can easily take out this plant before the Fight! phase begins, so playing them is a good idea. However, beware of anti-trick cards like Umbrella Leaf and Brainana.

As mentioned above, Bonus Track Buckethead is a good counter since it disables both its

Double Strike trait and its Evolution ability. However, it is recommended to play him where Gatling Pea cannot be played since Gatling Pea will emerge victorious if both of them exchange attacks. Gargantuar Mime can help also as he will do a bonus attack when it attacks. 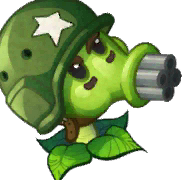 Unevolved Gatling Pea on the field

Unevolved Gatling Pea about to attack 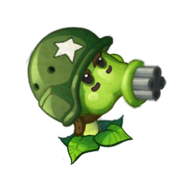 Gatling Pea's card as a flag in the Launch Trailer