Normal (for each pea)

After beating Level 3-4, purchase for $5000
Gatling Pea's parents were concerned when he announced his intention to join the military. "But honey, it's so dangerous!" they said in unison. Gatling Pea refused to budge. "Life is dangerous," he replied, eyes glinting with steely conviction.
Gatling Pea is an upgrade plant in Plants vs. Zombies. It is available for purchase from Crazy Dave's Twiddydinkies for $5000 after beating Level 3-4, and is one of the first upgrade plants available in the game, along with the Twin Sunflower. It upgrades from the Repeater and as such, must be planted on top of a Repeater. Each pea he fires deals 20 damage per shot, but he fires twice as fast as a Repeater and four times as fast as a Peashooter, resulting in four peas shot per round of fire.

Gatling Pea shoots four peas at a time. Although the two alternatives, two Repeaters (400 sun) or a Repeater and a Torchwood (375 sun), are cheaper than the Gatling Pea, the Gatling Pea saves space. Of course, it is also possible to use two Gatling Peas and a Torchwood, which is even more space-efficient, but will cost more. Gatling Peas are also very powerful in Survival: Day. Using a Torchwood doubles a pea's damage and provides minor splash damage, so placing a Torchwood in front of two Gatling Peas, in theory, is equal to 16 Peashooters with splash damage, making him a very strong plant. In fact, without Torchwood, he is the most limited upgrade in terms of area of attack (if one of the most concentrated), due to the fact that unlike Cattail, he can only shoot a straight line, and unlike Spikerock and Gloom-shroom, he can only kill one zombie at a time, again, without the Torchwood (also, he is more expensive than any of the plants above). In Survival: Endless, however, there may be so many zombies that even a Torchwood in front of four Gatling Peas is not enough to kill a wave of zombies quickly enough, especially when zombies with shields (including Zombonis) or Giga-gargantuars are present. Winter Melons may be a better choice for this. A good strategy, otherwise, could be two columns of Twin Sunflowers, three of Gatling Peas, Torchwood, Tall-nuts, then Spikerocks, and leave a blank column. This may be costly, but it is a good idea if you want to save space and keep good defense in some situations, such as Marigold farming.

An alternative strategy could be to upgrade Repeater later on in the game, instead concentrating on getting Torchwoods in each lane, and then upgrading to provide extra firepower.

In the DS exclusive mini-game known as Air Raid, Dr. Zomboss is on its Zombot flying in the air, and you have to destroy it using a Gatling Pea riding on an Flower Pot airplane. Try to upgrade your Gatling Pea as much as possible (like getting a Pumpkin), and try to dodge Dr. Zomboss's attacks. 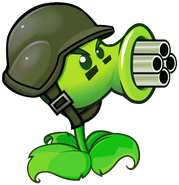 Gatling Pea seed packet in the iOS and Android versions

Gatling Pea in the DS version

A Gatling Pea from the Nintendo DS and DSi versions of Plants vs. Zombies

The Flower Pot Plane with a Gatling Pea in it

The Flower Pot plane with a Pumpkin around the Gatling Pea

A lawn full of Gatling Peas

Gatling Peas shooting peas that are passing through a Torchwood

Gatling Pea in a Pumpkin

Gatling Pea in an Imitater Pumpkin

A Gatling Pea plush
Add a photo to this gallery

Retrieved from "https://plantsvszombies.fandom.com/wiki/Gatling_Pea_(PvZ)?oldid=2344382"
Community content is available under CC-BY-SA unless otherwise noted.