When hurt: Do 1 damage to each other Plant and Zombie.
When destroyed: Do 5 damage to the Plant Hero.
There isn't a fart joke he hasn't heard.
Gas Giant is a galactic super-rare zombie card in Plants vs. Zombies Heroes and a member of the

He does not have any traits, and his ability does 1 damage to all fighters on the field every time he takes damage and 5 damage to the plant hero when he is destroyed. His closest plant counterpart is Grapes of Wrath.

He is based on a gas giant, a large planet mainly composed on gases like hydrogen and helium, with Jupiter and Saturn being examples in the Solar System.

His name and appearance are both puns on "gas giant," as he is a Gargantuar with gas surrounding him. The description is also a reference to the fact that gas is another term for flatulence, or fart, as well as he attacks with gas clouds.

There isn't a fart joke he hasn't heard.

Having average stats for his cost, Gas Giant has an extremely useful ability. It is also reusable as he is quite tanky and can take multiple hits. As a plus side, once he gets on the field your opponent must decide to either ignore him for a while, destroy him instantly or risk their entire formation, as his "When destroyed" and "When hurt" abilities can put a dent in either the hero or their plants.

Since he does damage when hurt, having at least two Gas Giants on the field should start a chain reaction where they keep damaging each other, as well as other fighters until one of them is destroyed and does five damage to the plant hero, or ten if the process destroys both. However, try to avoid this situation if the plant hero is close to a Super Block

Using Final Mission on this card is also very useful, as both it and the Gas Giant's ability can inflict up to 9 damage. Using this card with Binary Stars is a great yet risky idea, as Gas Giant will be able to deal 2 damage to the plants and 10 damage to the plant hero when destroyed, while at the same time putting Binary Stars and other zombies to greater risk of getting destroyed by Gas Giant's ability (though, Z-Mech can protect them).

Combining this card with Imp-Throwing Gargantuar, Jester, Gargantuar-Throwing Imp and Newspaper Zombie is also a good idea as when Gas Giant is hurt, he will damage these zombies, triggering their ability. It is also a good way to boost Valkyrie, provided those zombies get destroyed.

Since he is a Gargantuar zombie, Electric Boogaloo can use him with Supernova Gargantuar, Smashing Gargantuar, and King of the Grill in a Gargantuar deck. Professor Brainstorm can also use him with Wizard Gargantuar to do 5 unblockable damage to the plant hero (However, his "When Destroyed" ability is not affected). He can also Teleport in Gas Giant in a lane filled with weak attacking plants to purposefully activate his ability when hurt. Z-Mech can also play him earlier by using Gargologist.

Impfinity can make use of Gas Giant's ability to his advantage by playing Barrel of Barrels or Super Stench, which gives Gas Giant the

Deadly trait, allowing him to destroy all plants on the field upon being damaged. Alternatively, Impfinity can use Laser Base Alpha to not only give Gas Giant

Deadly, but also make him do heavy damage to the plant hero right away. However, take note this also makes Gas Giant destroy Impfinity's zombies when damaged, unless he has no other zombies on the field. Zombot Sharktronic Sub may be better, but it is almost useless in the current meta.

Treat this zombie as a Grapes of Wrath from the zombie side as it can deal a large amount of damage to the plant hero when destroyed. Due to the fact he can also do 1 damage to all other plants and zombies when hurt, you want to be careful with zombies that have "When hurt" abilities or any 1-health plants you have on board as it can turn into a disadvantage towards surviving. Try to destroy this zombie within one or two hits to prevent chaos from all fighters.

You can also Bounce this zombie to avoid both of his dangerous abilities, but consider carefully before doing so because the zombie hero can play him again later on. Healing capabilities are also necessary to avoid taking 5 damage if this gets destroyed. But if your hero has no healing capabilities, you'll have to counter him otherwise.

You can also make the zombie hero think twice before using this card by filling the field with nut plants while there is a Mirror-Nut on the field as when the Gas Giant takes damage, he will damage all the nut plants, resulting in Mirror-Nut doing heavy damage to the zombie hero. However, if Gas Giant gains Deadly or Impfinity has Zombot Sharktronic Sub, it will also wipe out your plants. Other heroes may also attempt to destroy the Mirror-Nut early or use a variety of methods to defend themselves.

You can also play Soul Patch and then destroy Gas Giant to let Soul Patch take the hit, and if you use a shielding card such as Force Field, the Soul Patch will not be damaged. If needed, you can also play The Great Zucchini to remove him in general. Body-Gourd is another counter to this zombie, you can play it and then destroy Gas Giant without having to worry about the aftermath. However, Crazy Heroes have plenty of ways to waste super-blocks, so beware of a Bungee Plumber. 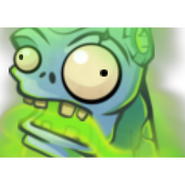 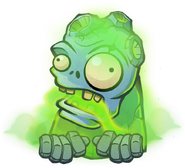 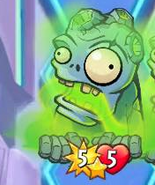 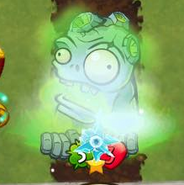 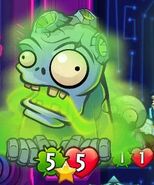 Gigantic Gas Giant due to a glitch

Small Gas Giant due to a glitch 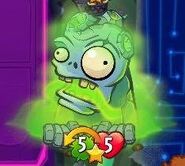 Overshoot trait due to Moon Base Z (PvZH)'s ability 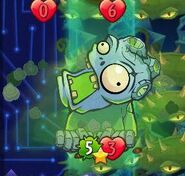 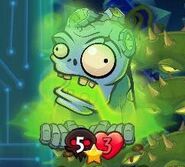 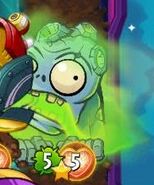 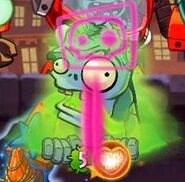 Escape through Time being played on Gas Giant 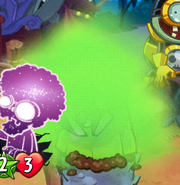 Gas Giant being the featured card in the menu for the October 8th, 2017 Daily Challenge