For other uses, see Garlic (disambiguation).

N/A
By launching her Garlic Drone companion, she can monitor Zombies from the skies, attack them from the air, and call in devastating Corn Strikes.

N/A
By launching her Garlic Drone companion, she can monitor Zombies from the skies, attack them from the air, and call in devastating Corn Strikes.

It can also call in a Corn Strike in which each corn can deal up to 70 damage. The Corn Strike attack takes ten seconds to recharge. Although it is very strong and fast, it has a weakness of fragility, with having only five health.

It can also fly for a limited amount of distance, shown by a Flight Power bar at the bottom. It takes 60 seconds to recharge. Its zombie counterpart is the Zombot Drone (Garden Warfare only) and Parrot Pal (Garden Warfare 2 and Battle for Neighborville only). The alternate abilities of this ability are the Artichoke Drone, the Dark Garlic Drone, and the Red Artichoke.

By launching her Garlic Drone companion, she can monitor Zombies from the skies, attack them from the air, and call in devastating Corn Strikes.

Garlic Drones deal moderate damage, but they have very little health. To survive, keep moving and stay a safe distance away from opponents.

Associated upgrades (Battle for Neighborville only)

The Garlic Drone is great for vanquishing players, especially in modes such as Suburbination, Gnome Bomb, and Herbal Assault. It has a fast fire rate, and each shot will deal a lot of damage. The corn strike is slow, but will deal a lot of damage, so place it in a strategic spot where zombies are or will run to. You will likely only get to use one corn strike, but it is possible to use two if you're fast enough.

However, the Garlic Drone has its downsides. Its shots are extremely inaccurate, making vanquishing a lot harder. Combine this with its low health, it can be difficult to defeat a zombie with its primary weapon. The corn strike, while damaging, is extremely slow, takes a second to fall down, and takes at least 2 seconds for the corn to detonate, allowing zombies to move out of the way.

Garlic Drones are extremely obnoxious to take care of, as you might concentrate on shooting them. Good targets are most Scientist, All-Star, and Engineer variants (except ones with good accuracy or a high rate of fire such as the Mechanic), which are typically worse at getting rid of Garlic Drones due to their short range or bullet drop. Other classes have easier means of defeating Garlic Drones.

Garlic Drone in a trailer 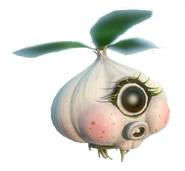 Garlic Drone as it appears 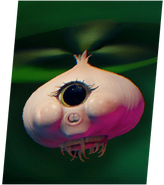