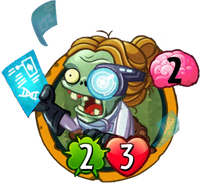 less.
After years of studying Gargantuars in the wild, she's dedicated herself to telling the world they're just misunderstood gentle giants. So far, nobody's buying it.
Gargologist is an event zombie card in Plants vs. Zombies Heroes and a member of the

. She does not have any traits, and her ability reduces the cost of all Gargantuar cards in the zombie hero's hand by 2

. This ability stacks with each Gargologist on the field and persists until all Gargologists are removed from the field.

Her name is a portmanteau of ‘Gargantuar’, referring to her “studying field”; and ‘biologist’, a scientist specialized in the study of life. Her name might be a pun on "garbologist," a person who studies modern refuse and trash as well as the use of trash cans, compactors and various types of trash can liners. Her description is a reference to the fact that Gargantuars in the entire series were simple brutes.

After years of studying Gargantuars in the wild, she's dedicated herself to telling the world they're just misunderstood gentle giants. So far, nobody's buying it.

Gargologist is mainly useful for any Hearty hero as each zombie class has at least one Gargantuar card, but she is most useful with The Smash or Z-Mech, as the Beastly and Crazy classes have the most Gargantuar cards out of all of them.

While Gargologist is on the field, you can play Gargantuar zombies such as Smashing Gargantuar, or even Gargantuar tricks like Zombot's Wrath for fewer brains. If you are planning to play a Gargantuar card on a turn, play her first as her cost and ability allow for twice as much lawn coverage at the same brain cost, as well as decreasing the cost of every upcoming Gargantuar card drawn given Gargologist survives combat.

Because the cheapest Gargantuar Zombie costs 5

, playing Gargologist on turn 2 means a strong Gargantuar zombie can be played the next turn. However, this is risky since Gargologist only has 3

for her survival. The slower but safer strategy is to play one or more Gargantuars after her on the same turn to utilize her value in a rush. Because she costs as much as she reduces the cost of one Gargantuar card, this is equivalent to a free 2

for the full cost of one Gargantuar card, which could potentially redirect attention from the Gargologist who’s more significant to the rest of the game.

If you do wish to play Gargologist on Turn 2, consider playing the environment Black Hole on a different lane to Gargologist on Turn 1, because it will greatly increase of chance of her surviving to Turn 3, as it drags threats like Bonk Choy and Apple-Saucer away from her. Note however that Berry Blast will still counter this play.

Each Hearty hero will be able to use this with any Gargantuar card, though more can be used with different classes:

Since she needs to stay alive to keep her ability in effect, try to boost her stats to increase her survivability. Fortunately, though, Gargologist is pretty tough for her cost. Playing Gargologist in Cone Zone allows her to survive Berry Blast or Fire Peashooter on turn 3. Rustbolt can also use Teleport and Teleportation Zombie.

Here is a table of all Gargantuar cards and their costs before any Gargologists and after playing exactly one Gargologist.

Typically, her normal appearance signals a serious Gargantuar deck, making her especially dangerous upon access to Gargantuars. Try to destroy her by her average stats, as quickly as possible, for example using the Berry Blast trick, before as your opponent can play their Gargantuars earlier, which can be as early as the next turn (5

). Because even the weakest Gargantuars boast massive stats, once Gargantuars start entering the field, it will be much harder to take control, unless a Doom-Shroom (all Gargantuar zombies have 5

or more) or a Tactical Cuke is readily available. 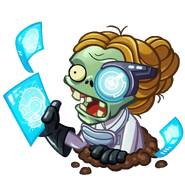 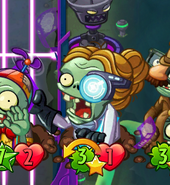 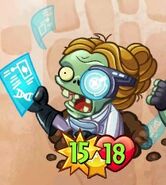 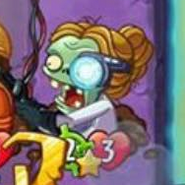 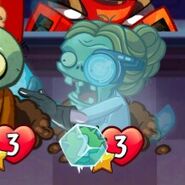 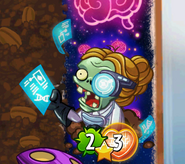 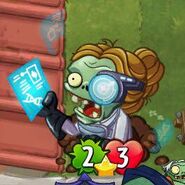 Gigantic Gargologist due to a glitch

Escape through Time played on Gargologist

Gargologist on the Weekly Event

Gargologist on the advertisement for the Weekly Events

Gargologist on the advertisement for the Event Rewind Bundle

Gargologist on the background of the Galactic Gardens battlefield

Galvanize being used on Gargologist.