Make 3 random Gargantuars in random Lanes.
This party doesn't make reservations.
Gargantuars' Feast is a premium legendary zombie trick card in Plants vs. Zombies Heroes, and a member of the

to play, and its ability makes 3 random Gargantuar zombies on random lanes.

Due to its high brain cost, it can be hard to play and therefore is rarely used. However, using multiple Gentleman Zombies and Gargologists can easily allow the player to play this earlier. Keep in mind that if there are 2 or less empty lanes, this trick is less cost-effective than playing two Gargantuars individually. Therefore, it is best to play this trick if there are at least three empty lanes.

Since it is in the gourmet tribe, Cheese Cutter has a chance to Conjure this trick and make it slightly cheaper. If you manage to play this under this circumstance, you will most likely win, as you will get three zombies of the most powerful tribe in the game as soon as you make 10 brains. Due to being a Gargantuar trick, Z-Mech can combine this with Gargologist and/or Zombology Teacher, allowing him to play Gargantuars' Feast as early as turn 9.

Impfinity can play Mixed-Up Gravedigger or Cursed Gargolith on the next turn, as both will hide all Gargantuars plus themselves in gravestones, resetting their stats and all damage done to them during the previous turn, as well as re-activating Rodeo Gargantuar or Zombot 1000's ability, if there are any. Electric Boogaloo can support these Gargantuars by using boosting tricks or Loudmouth, or even instant-kill tricks. However, only follow this strategy if your opponent survives the turn you played Gargantuars' Feast. Also, while Electric Boogaloo can run late-game control decks, Impfinity does not fare well in the late game.

However, this card is very luck-based, meaning you can end up as lucky as getting a Zombot 1000 or unfortunate enough to get a Wannabe Hero when you are low on health (which is probably the only undesirable situation, as most other Gargantuars are always better). Therefore, only use it if you are in need for some Gargantuars.

Note that if it targets the aquatic lane, the Deep Sea Gargantuar will always spawn there, as he is the only Gargantuar zombie with the Amphibious trait.

If you have Unlife of the Party on the field, he can boost himself by up to +3

when you use this trick.

This is the list of Gargantuars you can get from this card arranged by brain cost:

This card is rarely used, so the player should only worry a little about this card being played, and the best strategy is to win the game before it can be put to good use. However, when the time comes, the player has a very little chance of properly dealing with it. The player should try and quickly defeat any zombie hero with the

Crazy class just in case this happens. Should you survive the attack after the trick, using plants like Kernel Corn or The Great Zucchini could help lower the threat.

In the worst case scenario, use Squash to destroy some of the Gargantuars if the player is using a

Solar hero. Since all Gargantuars have 4 strength or more, using Doom-Shroom should be able to get rid of all those spawned Gargantuars easily assuming the player survived the onslaught. Beware, Doom-Shroom will also destroy your strong plants if you use it. Grapes of Wrath can also help ease the situation, as it can provide an easy 6 damage to the zombie hero if one of the made Gargantuars has destroyed it.

If you see the zombie hero saving up 11 brains, there is a high chance that they are about to use this trick, so prepare your defense against it. If you can, use Brainana to take away all of the zombie hero's brains or play Dark Matter Dragonfruit or even Forget-Me-Nuts to delay the usage of Gargantuars' Feast. Another way to avoid letting someone play this card is to defeat the opponent before turn 11 with rush decks. Keep in mind that any zombie hero has the ability to Conjure this card. 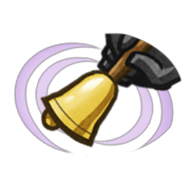 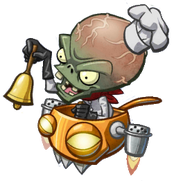 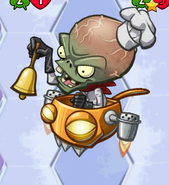 Immorticia with Gargantuars' Feast (which was Conjured by Mad Chemist) 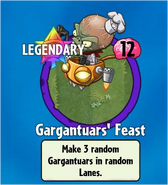 The player receiving Gargantuars' Feast from a Premium Pack before update 1.6.27 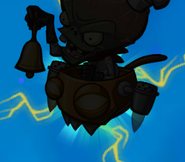 The player receiving Gargantuars' Feast from a Premium Pack

Gigantic Gargantuars' Feast due to a glitch