For more information about this character, see Gargantuar

So big. So dense. Does huge damage with pole. At half health, throws an Imp down his lane. Ginormous!

Gargantuar is a Neighborhood Zombie in Plants vs. Zombies 3. He is a zombie with extremely high health, which smashes plants instead of eating them and also throws an Imp at half health.

It is based on the zombie with the same name from the original game and its sequel.

Gargantuar's high HP and damage may make him difficult to deal with. Combined with being Normal-typed, he does not have an exploitable type weakness. As such, plants that deal high damage like Bamboo Shoots and instants like Potato Mine and Squash should be used against him. If a Gargantuar spawns cloesly with other high HP zombies, such as other Gargantuars, the Plant Food ability of Squash is great to use in such a situation.

Slowing his approach would greatly help while other plants attack him. He can be slowed down with Cabbage-Pult's Tacobility or Caramel Popcorn's caramel puddles, or stunned with Kernel-Pult's butter. Knocking him back with Ragweed or several Shuffle Truffles across rows is also effective, with the latter immune to being smashed when preparing to bounce the zombie.

Be mindful when using wall plants like Buttercup or Wall-Nut as they do not last very long against Gargantuar's strong attacks. 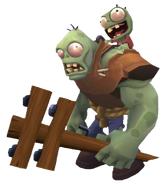 Unused design from the files
Add a photo to this gallery

Retrieved from "https://plantsvszombies.fandom.com/wiki/Gargantuar_(PvZ3)?oldid=2332881"
Community content is available under CC-BY-SA unless otherwise noted.