The Gargantuar's main attack is smashing his telephone pole in front of the player. Beware, as it can deal high damage and has splash damage as well. Also, beware that, if he roars, he will charge straight at the player and smash them. Although easy to dodge, other zombies will use this as an opportunity to attack. When Gargantuar bends down, he fires an Explosive Imp at the player, dealing high splash damage. Due to his size, he cannot be swallowed by a Chomper, rendering them semi-useless. The Gargantuar cannot be frozen, however he is not immune to the Chomper's Goop, which will slow him down and make him easier to vanquish.

When the slots land on three Gargantuars, an animation will show with a hand smashing out of the ground holding an Imp. The Imp then looks around while making small "eh?" noises. Suddenly, the Gargantuar unearths himself, roaring loudly. He then calms himself, stroking the Imp (which the Imp appears to enjoy) before putting him in his trash can. He then grabs his telephone pole from the ground, looking around wildly (presumably to search for plants/brains). The cutscene ends and the boss fight begins. During a Super Gargantuar Wave, Exploding Imps and Blitzers will appear often.

Probably the best way to survive a Super Gargantuar Wave is to get on something where the Gargantuars cannot hit you; like a rooftop or a tall rock or something like that. Beware that All-Stars, Tank Commanders, and Foot Soldiers can shoot you, and beware the fact that the Gargantuars can shoot their Imps at you with precision. If you are a Peashooter or a Kernel Corn, then you can Hyper Leap or Husk Hop on a high point, then you can rain down your firepower on the Gargantuars and zombies. Cacti should stay away from bosses but can lay Potato Mines around the garden to blow up the Blitzers and other zombies. They can also use their drones to corn-strike the Gargantuars from a distance, from a safe place. Sunflowers can heal their teammates but surviving this wave can be a challenge due to her health. The same applies to Roses. Citrons have more health and move pretty slow but can use their ball form to roll away from danger. They can also use their EMPeach to stun the zombie heroes.

If you're on a map where you cannot literally get on top of something to get away from the Gargantuars and you're on the same floor as them, then the best thing to do is to get away from them as possible, especially from the Garden. Try to kill all the zombie heroes and the Blitzers as possible then take your time killing the Gargantuars. These Super Boss Waves are not very hard on Normal/Easy difficulties. Hard mode will be challenging. In Crazy mode, you need to take your time on this - increased health Gargantuars with a bunch of Tank Commanders, Blitzers and Cricket Stars can make this a quite difficult wave. In GW1, there are lots of Tank Commanders, Blitzers and eventually Cricket Stars that will back them up on Crazy difficulty. In GW2, you get Rugby Stars, Soldiers, Blitzers, and other All-Star variants on Crazy difficulty.

"They're big, they're mean, and they wear XXXXXL jeans!"

-The splash screen for this Elite Wave 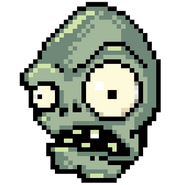 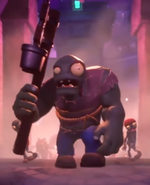 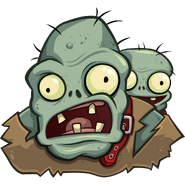 Retrieved from "https://plantsvszombies.fandom.com/wiki/Gargantuar_(Boss)?oldid=2287680"
Community content is available under CC-BY-SA unless otherwise noted.