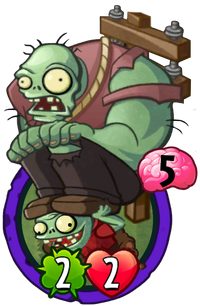 When hurt: Make a random Gargantuar that costs 5 in a random lane.
When lifting a Gargantuar, always bend at the knees. He learned this the hard way.
Gargantuar-Throwing Imp is an event zombie card in Plants vs. Zombies Heroes and a member of the

. He does not have any traits, and his ability makes a random Gargantuar zombie that costs 5

on a random lane every time he takes damage, unless all other non-aquatic lanes are occupied.

He was added in update 1.14.13, along with Garlic, Health-Nut, High-Voltage Currant, Banana Split, Sun-Shroom, Secret Agent, Imposter, and Zombie High Diver, and was made craftable in update 1.16.0.

When lifting a Gargantuar, always bend at the knees. He learned this the hard way.

This zombie has very poor stats for his cost. However, his ability to make a random 5-cost Gargantuar can make your opponent think twice before using cards that do damage over multiple lanes. Hence, this will deter opponents from just recklessly using Sour Grapes, Cherry Bomb, Berry Blast, and Lightning Reed.

Electric Boogaloo can use Gargantuar-Throwing Imp effectively since the

Beastly class has Gargantuar synergy with Supernova Gargantuar and King of the Grill, as well as zombie-boosting and plant stat-reduction cards. He can also use Maniacal Laugh and Vitamin Z to boost the health of Gargantuar-Throwing Imp, allowing him to make more Gargantuars and inflict more damage. He can also use Biodome Botanist to make a 1

Professor Brainstorm can use him with Teleport to put him in a lane filled with low-strength plants to purposefully activate his ability, which is useful if he has Wizard Gargantuar on the field.

Z-Mech can also use health-boosting tricks like Rock Wall and Camel Crossing on Gargantuar-Throwing Imp to improve his overall survivability. But you must note that even though this zombie depicts a Gargantuar being carried by an Imp, he is not in the Gargantuar tribe, meaning that Gargologist does not lower his brain cost. If you still need to lower his brain cost, resort to using Flag Zombie.

Impfinity can pair him up with Imp Commander to draw cards should Gargantuar-Throwing Imp hit the plant hero, as well as Toxic Waste Imp, which will destroy any plant he hurts.

If increasing his health is not an option, there are means of forcing him to throw multiple Gargantuars with his 2

. If there is a lane with two attacking plants, each plants will activate his ability once. Using Fireworks Zombie and Barrel of Deadbeards are also other ways to activate his ability. You can also play this in Spikeweed Sector or Hot Lava to make more Gargantuars, although Hot Lava is more optimal due to it doing less damage.

Boosting the strength of this zombie can result in placing your opponent into dilemma - if they ignore him, he will continue to do damage. If they damage him, then Gargantuars will be made. An easy way to create this progress is using Meteor Z or Sugary Treat. However, do not boost him too much or your opponent will not hesitate to destroy him.

Here is a list of the possible Gargantuars that can be made when Gargantuar-Throwing Imp is damaged:

Try to destroy him in one attack, as the more attacks he takes, the more Gargantuars you must deal with. Fortunately, you will only need one attack in most cases due to his health. However, instant-kill or stat-lowering cards like Lawnmower, Whack-a-Zombie, Water Balloons, and Eyespore work better, as they do not damage the zombie, preventing him from making any Gargantuars (although there may be better zombies to use them on). If you must destroy him by other means, make sure you have a way to destroy any Gargantuars he creates. Shamrocket and the aforementioned cards work well at destroying the Gargantuars made. If there are several Gargantuars, Doom-Shroom is a good choice to wipe out all of them.

However, it may be better to leave Gargantuar-Throwing Imp alone, as he only does 2 damage per attack if unboosted, so that you can focus on other areas in the game.

Do not use Shroom for Two, Pair of Pears, or Veloci-Radish Hunter against this zombie, as he can easily make two Gargantuars because he will take damage twice. 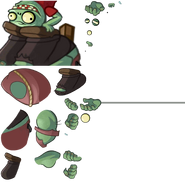 Gigantic Gargantuar-Throwing Imp due to a glitch

Gargantuar-Throwing Imp on the advertisement for the Birthdayz Bundle

Gargantuar-Throwing Imp on the advertisement for the Birthdayz Bundle

Gargantuar-Throwing Imp on the Birthdayz Bundle

Gargantuar-Throwing Imp with a star icon on his strength