Move a Plant. Draw a card.
Made of the softest fabric for that gentle Plant touch.
Gardening Gloves is a premium uncommon plant trick card in Plants vs. Zombies Heroes and a member of the

to play, and its ability moves a selected plant onto a selected lane and draws a card. Its closest zombie counterparts are Carried Away and Smoke Bomb.

It is based on a pair of gloves, a garment covering the entire hand. This type of glove, called a gardening glove, is related to gardening, the practice of growing and cultivating plants as part of horticulture.

Its design and ability are based on its previous appearances in the series.

Made of the softest fabric for that gentle Plant touch.

This trick should be used to move a strong plant fighter into a weakly defended lane or a lane with no zombies. It can also be a counter against

Anti-Hero zombies, as the player can move a plant into the zombie's lane, reducing the zombie's strength. The bonus of drawing a card when this trick is used is also useful.

This trick may come in handy when you want a

Bullseye plant to land a direct hit on the zombie hero safely, or you feel like you have to protect frail plants like Sunflower or Seedling. Spudow can also make use of this trick to move plants with the

Anti-Hero trait into empty lanes, so that they can do more damage to the zombie hero.

Because it gives you a card as well, Grass Knuckles can use this as a cheap way to boost his Dino-Roar plants. Alternatively, he can use this while Re-Peat Moss is on the field to make it do a bonus attack, since Gardening Gloves is a trick. This also allows him to use Re-Peat Moss to do damage to and possibly finish off a target of his choice, assuming there isn't a plant there.

Use Sumo Wrestler, Terrify and Rodeo Gargantuar to move the plant back to its original lane, or use Smoke Bomb or Carried Away to move the zombie onto the lane the plant was moved to. You need to beware of any Dino-Roar plants on the field, since they will activate their Dino-Roar abilities. 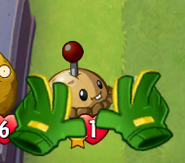 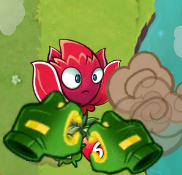