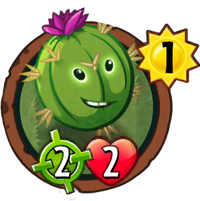 When destroyed: Do 1 damage to everything.
"I take pity on no one. For I am Galacta-Cactus!"
Galacta-Cactus is a galactic super-rare plant card in Plants vs. Zombies Heroes and a member of the

It is based on a ball cactus, more specifically, the spinystar (Escobaria vivipara), a small spherical cactus covered in a mat of star-shaped arrays of straight white spines, and flowers in yellow, pink, or purple blooms.

Its name is a portmanteau of "Galactus," a fictional character from Marvel Comics, and "cactus," the real-life plant it is based on.

"I take pity on no one. For I am Galacta-Cactus!"

This is a very powerful plant for just 1 sun, and its ability can help greatly. As a turn 1 play, Galacta-Cactus can be played to land 2 unblockable damage on your opponent, but it is also nifty at taking down certain threats with 3

if directly confronted with, the most infamous examples being Aerobics Instructor, Arm Wrestler, Headstone Carver, and Quickdraw Con Man. Since plants play after zombies, you will be able to freely choose who to target with Galacta-Cactus. If Galacta-Cactus is played a bit later, it can serve as a method of clearing the field of pesky zombies and glass cannons.

Galacta-Cactus' ability to damage your own plants may sound unappealing, but it works very well with a few combos in the Guardian class. Arguably, the most renowned example is Mirror-Nut, who will be able to do heavy damage to your opponent if there are many nuts out on the field. It can also activate the abilities of Hibernating Beary and Pear Cub, creating threats to your opponent quickly, and Prickly Pear's too, dishing out 4 extra damage to a zombie on its lane, potentially preventing it from surviving or even attacking. If you are playing as Wall-Knight, you can use Galacta-Cactus to start a chain reaction with Aloesaurus, Pepper M.D., and Heartichoke, as Aloesaurus will be able to heal every one of your plants. However, this also means that you should avoid using plants that have 1

(excluding Pear Cub since its purpose is to get destroyed) unless you boost their health, as they will be destroyed by this plant's ability.

However, there are several instances where you have to be careful, or even hold back on playing this plant. The first instance is when you are low on health, as your opponent may take advantage in this and destroy it, further lowering your health. Playing this with only 1 health left should never be done since your opponent can just destroy this and cause a loss, even if your opponent has 1 health left as well, due to its ability targeting the plant hero first. You also can't block it either, since

Bullseye applies to its ability as well. If you still want to use this plant if you are low in health, it is a good idea to bring Soul Patch, Poppin' Poppies, or any other healing cards to ensure survival.

Crazy heroes can be both rewarding and risky at the same time, as while many of their zombies have very low health, there are a few zombies who cause more trouble when hurt by Galacta-Cactus, such as Newspaper Zombie or Jester. Even if you don't see the aforementioned zombies on the field, your opponent may have a Valkyrie in their hand and be baiting you to destroy the low-health zombies, so you should keep that in mind too.

Armored trait or are shielded.

Since it has low stats, Bungee Plumber and Rolling Stone can destroy it easily, but Galacta-Cactus causes more trouble when it is destroyed. You should generally avoid destroying it recklessly if you spot plants that benefit from being hurt. If you are playing as a Crazy hero, you can purposefully destroy it to activate the ability of Barrel of Deadbeards, Jester, Newspaper Zombie, or Gas Giant. However, only do so if your opponent isn't setting up any combos, because you may lose more than what you gain. Fortunately, you won't have to worry with Zombot Sharktronic Sub on the field, as Galacta-Cactus will damage all your opponent's plants, resulting in Zombot Sharktronic Sub activating its ability to destroy them all.

You can also use Landscaper or Shrink Ray to prevent Galacta-Cactus from chipping away at your health, letting you focus on something else. However, be warned of Spineapple, Loco Coco, or cards that can increase its strength.

If you have 1 health, do not touch it, as it will instantly defeat you if you destroy it. Instead,

Freeze or Bounce it to stall for time while healing your hero or surviving for the next few turns. However, if both you and your opponent have 1 health, destroying it will win you the game as Galacta-Cactus always damages the plant hero first. 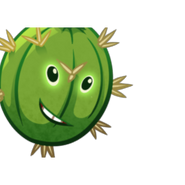 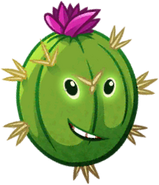 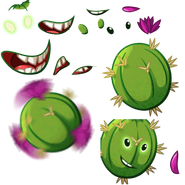 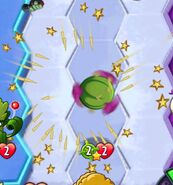 Galacta-Cactus with a star icon on its strength

Galacta-Cactus tinted gray due to a glitch

Two Galacta-Cacti on a lane 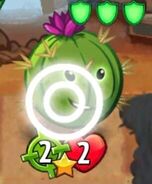 Galacta Cactus with a selection icon 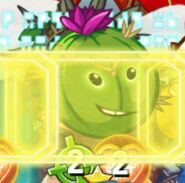 Peel Shield being played on Galacta-Cactus 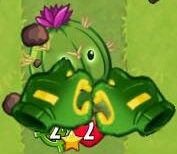 Gardening Gloves being played on Galacta-Cactus