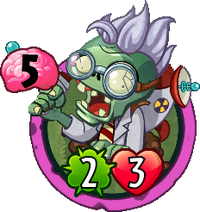 When played: Each Science Zombie does a Bonus Attack.
Wishes the Mad Chemist would stop copying his hair style.
Gadget Scientist is a premium rare zombie card in Plants vs. Zombies Heroes and a member of the

. He does not have any traits, and his ability makes every science zombie on the field, including him, do a bonus attack when he is played.

His description mentions Mad Chemist, who both have the same hair color. However, Gadget Scientist's hairstyle slightly differs from Mad Chemist's.

Wishes the Mad Chemist would stop copying his hair style.

By himself, Gadget Scientist is a weak zombie that only does one bonus attack, and is not worth the expensive cost. However, if you play him when there are other science zombies on the field, Gadget Scientist can wreak havoc against your opponent. Many science zombies benefit greatly from bonus attacks due to them either having a useful ability such as Kite Flyer and Zombot Drone Engineer, or simply have high base strength like Copter Commando and Zombot Sharktronic Sub. This allows you to create several finishing combos (often with high-strength zombies), making Gadget Scientist a good finisher and a game changer.

Since Gadget Scientist affects all science zombies on the field, it would be best to have as many science zombies as you can on the field before you play him. But since the science tribe generally does not support rushing (as its cheaper zombies have low strength), you should try to maintain tempo; in other words, keep your zombies alive while getting some more on the field. A late-game deck or a ramp deck would be optimal, as you get to play more cards per turn, thus making it easier to keep your zombies alive.

Frenzy; the traits given will result in more harm to your opponent's plants. Gargantuar Mime is also a powerful example, as he does an extra bonus attack per each bonus attack caused by Gadget Scientist.

Gadget Scientist is a pretty weak zombie on his own, but his ability is the dangerous part. If you see your opponent getting many science zombies on the field at once, they may be preparing for a Gadget Scientist to overwhelm your plants with bonus attacks; while many early to mid-game science zombies have low strength, they will have accumulated some extra strength thanks to some early Zombot Drone Engineers. Try to destroy as many of them as you can before that happens to make his ability less effective when he is played, or better, discourage your opponent from playing him at all.

If you think your opponent will play this, use high-health plants or those with the Team-Up trait to block the science zombies' bonus attacks. You can also play Wing-Nut (preferably on turn 4) to deter your opponent from just playing him. However, if you choose to block them, Super Brainz can use Super Stench to give all of them the Deadly Trait and easily counter your plants next turn. Wing-Nut is also prone to removal due to its ability hindering Brainy Heroes greatly (Backyard Bounce, Alien Ooze, Locust Swarm, Knockout, Exploding Fruitcake, etc)