Special
This futuristic friend is made of metal, but she doesn't let that slow her down... well, actually she is a bit slower. But she's tougher too!
Future Parrot Pal is an alternate ability to the Captain Deadbeard's Parrot Pal ability in Plants vs. Zombies: Garden Warfare 2. It is available from Rux in Rux's Bazaar for 500,000 coins. The difference between the two is that the Future Parrot Pal moves slower and has 20 health compared to the regular Parrot Pal's 5. Its weapon (also called the Parrot Pulse) also has a slightly slower rate of fire but deals more damage (dealing 10 damage (12 critical)) and overheats slower as well. Before the Rux visit, the only way to unlock this ability was by purchasing the Dr. Zomboss' Frozen Upgrade through the Origin Store/PlayStation Store/Xbox Store for $9.99. Its ability is called the Eggsplosion.

This futuristic friend is made of metal, but she doesn't let that slow her down... well, actually she is a bit slower. But she's tougher too!

It's definitely recommended to stay farther with this drone, as not only is the damage at close range and at range the same, but due to your slower speed, if the plants decide to attack you, they're going have a much better chance at taking you down than if you were to attack them from a distance. Its Eggsplosion has a much larger radius than its vanilla counterpart's airstrike, making it perfect for objective maps such as Suburbination, Turf Takeover and Gnome Bomb. However, you do have to note that it takes longer to activate the airstrike and it will do less damage as a result.

The Future Parrot Pal with the "Special" rarity, only seen if you bought it in Dr. Zomboss' Frozen Upgrade 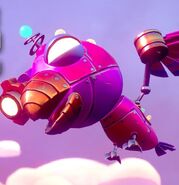