Super Rare
The Cactus of the future that Crazy Dave brought back to help him win the war against the Zombies.

Super Rare
The Cactus of the future that Crazy Dave brought back to help him win the war against the Zombies.
Future Cactus is a Super Rare variant of the Cactus in Plants vs. Zombies: Garden Warfare and Plants vs. Zombies: Garden Warfare 2. Her primary weapon is named Future Shot. She is unlocked by buying sticker packs in the Sticker Shop. She can charge up her primary weapon to significantly increase impact damage and add in splash damage to each fully charged shot. A charged shot can only stay charged for a short while before it fires automatically, like the Plasma Pea and Mystic Flower.

The Cactus of the future that Crazy Dave brought back to help him win the war against the Zombies.

Future Shot is the primary weapon of Future Cactus; all facts below apply to a fully upgraded weapon.

The Future Cactus' primary weapon is the Future Shot. It is a semi-automatic and chargeable weapon that will deal 17 to 85 impact damage and 20 to 96 critical damage, both depending on the charge rate. A fully charged shot will also deal 30 splash damage.

Damage increased in ways we can't yet comprehend with this futuristic ammo.

The Future Cactus is arguably one of the most versatile members of the Cactus family. Her charged shot (which can deal up to 107 critical damage when fully charged) is strong enough to kill a Scientist in a single hit and any other zombie in two hits (even a full-health All-Star will go down if hit twice on the head with a fully charged shot).

If a zombie attacks you at close range, the Future Cactus' uncharged shot can be a last resort since her reticle is very focused, and there is little to no recoil. The low recoil makes close-range combat easier, but this does not mean that the Future Cactus is effective at close range. She quickly burns through her entire magazine (which holds 12 shots, and 15 when upgraded). Use Potato Mines and Tallnut Battlements while backing up to create a gap between you and the threat, allowing you to zoom in and/or charge a shot.

The Future Cactus is capable of dealing more damage per shot than any other Cactus, but the shots take a while to charge up, and once fully charged, they decrease your movement speed and make you very visible with a bright glowing light in front of your face, so watch out when performing this on nighttime maps, as the zombies can see you from far away. A good way to deal with this is to charge up behind a wall where zombies may see you but cannot harm you (except for zombies/abilities that deal splash damage), come out of cover to fire, and then repeat.

These traits make the Future Cactus extremely versatile since she can eliminate targets almost instantly, can force enemies out of cover with the fully charged shot's splash damage, and can, only as a last resort in the worst of situations, attack enemies at close range.

If you are at a high vantage point while sniping, it is possible to use the Future Shot's charged shots to destroy teleporters and Zombot Turrets if you can get a clear shot.

The Future Cactus gains a new purpose due to the advent of the Z-Mech. When at maximum charge level, the Future Cactus' primary weapon can deal as much as 102 damage, making it ideal for anti-armor tasks, in this case, for destroying Z-Mechs. The Future Cactus is capable of dealing so much damage per shot that it only takes around three fully charged shots to destroy a Pylon Mech (which is the weakest Z-Mech variant) and around four fully charged shots to destroy a Drake Mech or a Scallywag Mech (which are the most challenging variants to vanquish).

A Z-Mech will take massive damage if you land a fully charged hit on the Z-Mech's cockpit window. On the other hand, if your fully charged shot hits any other part of the Mech, it will still deal a considerable amount of damage. This strategy, coupled with the Future Cactus' long attack range, can effectively allow the player to turn it into a long-range anti-armor turret capable of dealing damage in quantities that not even a Z-Mech can ignore.

Although the Future Cactus can be a devastating long-ranged hit-and-run specialist, she isn't that good at close-ranged combat. Scientist and All-Star can be good against Future Cactus at close range, but close range only. As a scientist, you should try to warp over to Future Cactus and run around her while shooting at her.

If you are an All-Star, you can try to ambush her and throw an Imp Punt or Long Bomb at her or shoot her with your primary weapon. Beware of Potato Mines because, although they may not instantly kill you (All-Stars above 175 health only), they can still take a majority of your health out. 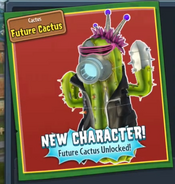 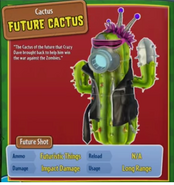 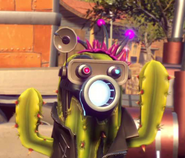 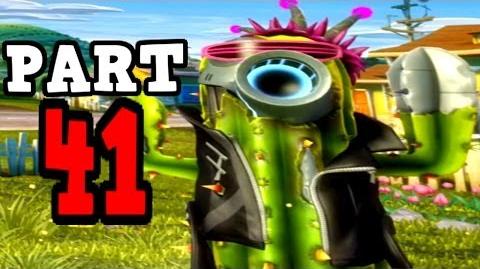