But you can just call me Crazy Dave.
Fume-shroom has different capitalization or spelling depending on what game it is in. When editing, use the term used in the game in question.

For other uses, see Fume-shroom (disambiguation).

MEDIUM RAGE: ARMOR BREAKER
Shoots out acidic bubbles that are effective at damaging shields and armor.

It is good in general for taking out medium-health zombies and shielded zombies. Plant it near the garden so if a shielded zombie with relatively high health in armor comes around, the Fume-shroom should be able to take it out. Their range can be considered decent as it is very similar to medium range. They work very well against Screen Door Zombies, Coffin Zombies, Outhouse Zombies, Barrel Pirates, Newspaper Zombies, and Map Pirates. 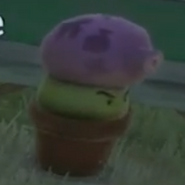 Fume-shroom's stickerbook description in Garden Warfare 2
Add a photo to this gallery
Retrieved from "https://plantsvszombies.fandom.com/wiki/Fume-shroom_(Spawnable)?oldid=2282315"
Community content is available under CC-BY-SA unless otherwise noted.