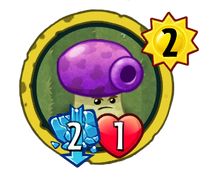 For other uses, see Fume-shroom (disambiguation).

None
"I'm like the wind. Near a hog farm."
Fume-Shroom is a premium uncommon plant card in Plants vs. Zombies Heroes and a member of the

Strikethrough trait and does not have any abilities. Its closest zombie counterpart is Hot Dog Imp.

It is based on the plant in Plants vs. Zombies with the same name and similar appearance.

Strikethrough ability is a reference to how, in previous games, Fume-Shrooms bubble spray can pass through various types of zombie armor.

Do not expect Fume-Shroom to last long, because it can be destroyed by any zombie that does damage. However, its

Strikethrough trait always guarantees damage to your opponent unless they block the attack, even if the zombie in front of the Fume-Shroom survives it.

If you are playing as Solar Flare, try to pair it with Buff-Shroom or Punish-Shroom, as it is a mushroom plant. Chompzilla may not have mushroom synergy, but she can play stat-boosting cards like Fertilize to boost Fume-Shroom. However, other

Strikethrough plants can easily outperform it.

While Fume-Shroom is a very frail plant, its

Strikethrough trait means that it can damage the zombie in front of it as well as you before going down itself. Playing a trick to deal with Fume-Shroom before it can even fight is the most ideal choice. Rolling Stone, Nibble, and Acid Rain are examples of such tricks. However, be aware when Punish-Shroom is in play. 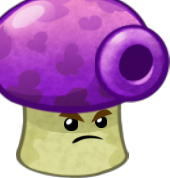 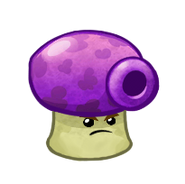 Fume-Shroom about to attack

Fume-Shroom with a star icon on its strength 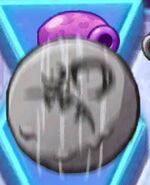 Rolling Stone being played on Fume-Shroom

Fume-Shroom as the profile picture for a Rank 28 player 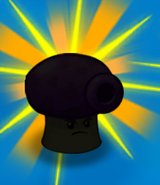 The player receiving Fume-Shroom from a Premium Pack

Fume-Shroom as the profile picture for a Rank 28 player

The player having the choice between Fume-Shroom and Smoke Bomb as the prize for completing a level before update 1.2.11