Similar to how Gauntlets function in Arena, Fuel is used to play a Penny's Pursuit level. 5 of them are required to play and are consumed as soon as the player enters a level.

A unit of Fuel can be obtained every 24 minutes. Additionally, 15 of them can be bought in the store for 30 gems. 5 of them can also be obtained by watching an ad. Fuel has maximum capacity of 15. If you watch an ad for more Fuel, it will go over 15. 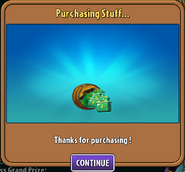 Purchasing Fuel in the store 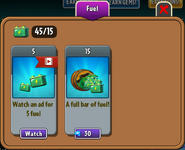 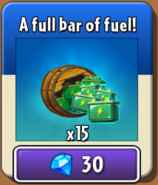 Fuel in the store 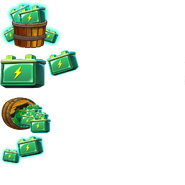 A full bar of Fuel
Add a photo to this gallery

Retrieved from "https://plantsvszombies.fandom.com/wiki/Fuel?oldid=2347064"
Community content is available under CC-BY-SA unless otherwise noted.