Not to be confused with Ice block.

Frozen blocks are environment modifiers that appear in Frostbite Caves, Modern Day and Piñata Parties in Plants vs. Zombies 2. They contain either plants or zombies.

Most Fire plants can melt the blocks with their radiating heat and free whatever is inside over time, while Hot Potato can melt them instantly when planted on top of one. Other plants can free the plants or zombies within by simply attacking them until they are destroyed.

Freezing winds can encase plants inside of frozen blocks, and often they will be on the lawn at the start of the level containing either plants or zombies. Hunter Zombies can create them by throwing snowballs at plants; a plant will become encased in a frozen block after being hit with three snowballs. This does not apply to thawing plants (excluding Wasabi Whip in the Chinese version), Cold Snapdragon,and Missile Toe, as they cannot be frozen. They will always come in sets of three when a Troglobite appears and each will contain a Yeti Imp. If they are pushed onto a tile with a plant, the plant will be crushed. They cannot move over ice floes and Troglobites will stop pushing them at that point.

These can be helpful if they are encasing endangered plants. In other levels, heating plants, like Pepper-pult or Fire Peashooter, should be placed in a checkered pattern to thaw frozen plants or used as a first line of offense in a level with Hunter Zombies and Troglobites. Lava Guavas and Jack O' Lanterns can also bring warmth to the plants and making large amounts of damage to several zombies.

In the Zombot Tuskmaster 10,000 BC´s battle, heating plants are extremely useful to fight against frozen winds released by the Zombot, as they can protect other plants from being frozen.

Troglobite pushing a row of frozen blocks with Yeti Imps inside

A Wall-nut encased in a frozen block

A Magnifying Grass in the first stage of being frozen

A Magnifying Grass in the second stage of being frozen

A Magnifying Grass encased in a frozen block 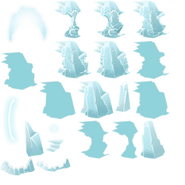 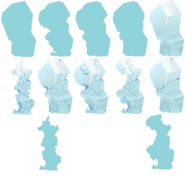 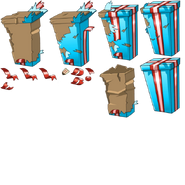 Concept art of a frozen block, along with some Frostbite Caves zombies

An Octo Zombie in a frozen block

Chinese version of Plants vs. Zombies 2  (China only)

A Cave Zombie walking behind the frozen block