Rare
There's more to the Frozen Citron than just a frosty demeanor. He's great at ice fishing, and his toboggaming skill are second to none.
Frozen Citron is the Rare ice variant of Citron in Plants vs. Zombies: Garden Warfare 2. He was first shown as an Easter egg in the September 2015 developer diary, and later teased in the Aloe 5: Gardening spoof image, but was later showcased in some beta footage of the Backyard Battleground.

Like all ice variants, if he shoots a zombie for long enough, they will freeze in place, making them easier to vanquish. He also deals more impact damage than the normal Citron, around 3-10 damage depending on range but does not deal any splash damage. However, his weapon also overheats more quickly than the normal Citron.

He was the only Citron variant unlockable in the multiplayer beta.

​There's more to the Frozen Citron than just a frosty demeanor. He's great at ice fishing, and his toboggaming skill are second to none.

His Frosty Beam will slow and eventually freeze Zombie foes!

The Frozen Citron's primary weapon is the Frosty Beam. It fires a laser beam similar to that of the base Citron's Orange Beam, dealing 3 - 9 impact damage and 4 - 11 critical depending on the range of the target, which the weapon dealing damage at 400 ticks per minute. The weapon has infinite ammo, though like the Orange Beam, if the weapon is fired for too long it will overheat. Unlike the Orange Beam, the weapon deals no splash damage, though enemies hit will be slowed down, and if enough damage is dealt the enemy will be frozen, disabling their movement capabilities and preventing them from using their abilities.

Frozen Citron's beam, although having somewhat low damage compared to the other Citron variants, can freeze opponents ridiculously quickly, making him a very excellent support class. Try to stay with your allies as you attack, as your damage is not the best when fighting opponents, but allies will greatly appreciate the extra status on their opponents. This Citron is incredibly effective against Z-Mechs (EMPeach, Ice Beam).

Try to get into the fight early, as you can hold your own the longest out of most other plants (Use your peel shield after you take 50-75 damage). Try and take on no more than 2 zombies at a time as your primary weapon overheats faster than the other citrons. If you manage to sneak behind zombies (in ball form), get their attention by using your charge attack (Doing 50 damage to anyone struck), jump up into the air, transform back into Assault mode and finish them off. This Citron relies on the accuracy of the player. Try and maintain a good lock on your enemies to quickly vanquish them (This is easier to do with this Citron as your Ice Beam slows opponents).

Take out Frozen Citron if you see him, as his beam is capable of freezing you or your allies at an even faster rate than Arctic Trooper, who is well known to freeze plants at an absurdly fast rate. Long range attacks on Frozen Citron are a good idea, as his beam becomes very weak at longer ranges. A terrible idea is to fight it in a Z-Mech as any Imp, as he can stun-lock you with his EMPeach and his freeze status, making you a very vulnerable and easy target. If you are playing an Imp and find a Frozen Citron in Ball Form, try and catch it in your Gravity Grenade for an easy free vanquish (most effective in herbal assault as most citron players tend to jump around objectives in ball form). 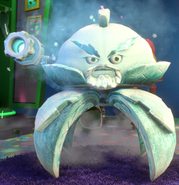 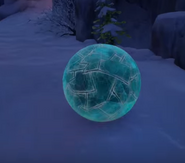