Same as before
Frostbite Caves - Day 9 is the ninth level of Frostbite Caves in Plants vs. Zombies 2. Dodo Rider Zombie makes its first appearance here. After completing this level, the player receives a money bag.

This level is straightforward. Dodo Rider Zombie is a relatively weak target, and using Blover or Hurrikale will completely negate its effects and will allow the player to use the bottom two lanes for sun production. Also, the absence of Hunter Zombies makes this level easier to beat.

There are no frozen winds in this level so there is no need for thawing plants.

Securing the lawn with defensive plants is the best way to pass the level smoothly. Planting a few Wall-nuts should be enough, but the player can use Tall-nut or Infi-nut's Force field to secure themselves from Dodo Rider Zombie.

Like some other Frostbite Caves levels, this one starts off quickly and with multiple zombies right off the bat. The player can bring two instant kills, Ghost Pepper or alternate between a instant kills and Hurrikale (or Chard Guard if replaying the level).

Start by planting Twin Sunflowers, when the 1rst 2 zombies comes, put a Potato Mine on column 2, row 1 because these 2 zombies will eventually be on the same row as the Potato Mine and they will trigger it. Start planting Pepper-pult on row 2 & 4, when the Do-Do Rider Zombie comes, place a Kernel pult on the row it is, then when it is buttered place a Snapdragon near the zombie, it will easily be killed. Use Plant Food to get extra sun to plant Pepper pult, you should have a column of Pepper-pult and Kernel-pult before the 2nd huge wave. Start placing Wall-nut up close and Snapdragon behind it to deal continuous damage while the zombies eat the Wall-nut. Eventually, replace the Twin Sunflower with Pepper-pult to prepare for the final wave. When it comes, after all the zombies come in the middle of the lawn, use any plant food on Pepper-pult to easily defeat these zombies. After that, you successfully completed the level, :).

By Garney the Garnet Dragon

By Chainut
Add a photo to this gallery 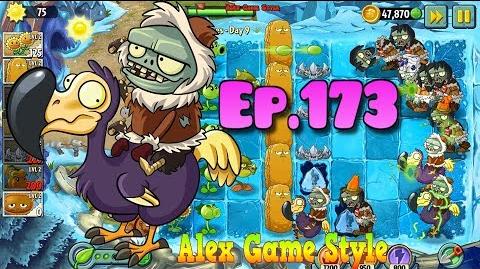 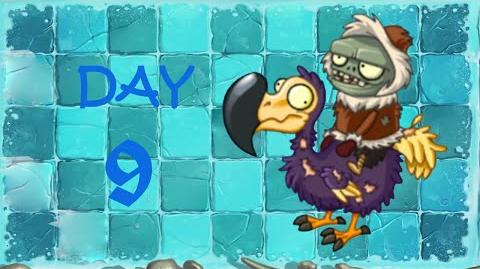 Frostbite Caves Day 9
Add a photo to this gallery

Retrieved from "https://plantsvszombies.fandom.com/wiki/Frostbite_Caves_-_Day_9?oldid=2357811"
Community content is available under CC-BY-SA unless otherwise noted.