Same as before
Frostbite Caves - Day 21 is the twenty-first level of Frostbite Caves in Plants vs. Zombies 2. It is a Special Delivery level. Fire Peashooter is introduced here. After completing this level, the player receives a money bag.

The player should not have much trouble with this level, as plenty of Fire Peashooters given in the level to easily warm plants up caused by freezing winds. The only dangerous zombies present are Hunter Zombie and Blockhead Zombie.

Snapdragons and Magnet-shrooms are advised to be placed behind the slider tiles or the Wall-nuts once frozen, so they cannot be attacked.

Spikerocks are difficult to use if placed far to the right as many freezing winds come around and freeze them. Since Fire Peashooter would almost be bitten instantly if planted to the right, most Spikerocks will stay frozen for the rest of the level.

A huge wave of zombies is approaching 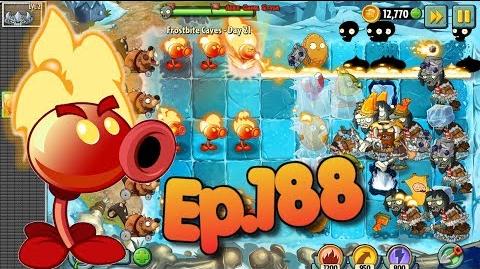 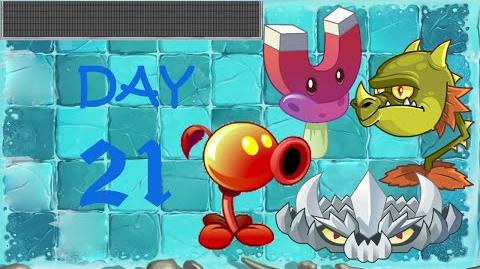 Frostbite Caves Day 21
Add a photo to this gallery

Retrieved from "https://plantsvszombies.fandom.com/wiki/Frostbite_Caves_-_Day_21?oldid=2277508"
Community content is available under CC-BY-SA unless otherwise noted.