Survive and protect the endangered plants
Frostbite Caves - Day 15 is the fifteenth level of Frostbite Caves in Plants vs. Zombies 2. It is a Save Our Seeds level. To complete this level, the player must protect two Pepper-pults. There are two sliders that will push zombies up and one down in the lawn. The player has to protect two Pepper-pults - one at the top of the third column and the other at the bottom of the fourth column. When this level is finished for the first time, the player receives a tablet that indicates a message regarding an upcoming massive onslaught.

(After beating the level and obtaining a stone tablet)
Crazy Dave: Penny, hath you ever tried licking an ice-thickle and got your tongue thtuck to it?
Penny: No, User Dave. I have not.
Crazy Dave: Uh... me neither. Thath would be craaaazthy.
Penny: Sigh. While your tongue heals, please note the strange stone tablet.
Penny: It appears to be a warning sign, written in Cave Zombie.
Crazy Dave: Doesth it warn people not to lick ice-thickles?

This strategy makes use of Sweet Potato's attractive powers to neutralize slider tiles' effects. It should be noted that all non-single use plants are planted behind the slider tiles and endangered plants in this strategy. At the beginning of the game, four Twin Sunflowers should be planted in order maintain the sun economy. Single use plants such as Squash, Potato Mine, Chili Bean, Stunion, Hurrikale, and Stallia are highly recommended to instantly kill or stall incoming zombies. As soon as enough sun is obtained, Sweet Potatoes should be planted; first one behind the uppermost slider tile, second one behind the lowermost slider tile. In the duratşion of the game, these plants should constantly be supported, preferably with Hurrikales, Torchwoods and Wall-nut first aids, as keeping them alive and defrosted is the center of this strategy. As soon as enough money is obtained, Pea Pods and Torchwoods should be planted behind Sweet Potatoes. Sun Bean should be given to Conehead Zombies Buckethead Zombies and Blockhead Zombies occasionally to obtain large quantities of sun. Only two Plant Foods are given in the level, both of which should be used on Torchwoods to make the best use of Pea Pods. As long as Pea Pod defenses are built, this strategy should sustain itself until the end of the level. However, one Torchwood should be planted on the first tile of the third row in order to prevent surrounding plants from freezing. Bloomerangs Laser Beans Cacti or A.K.E.E.s can be used on the first, third and fifth lanes to increase the pressure on the Zombies. Additionally, Dodo Rider Zombies can be blown away using Hurrikales until the Pea Pods and Torchwoods are set. Once this strategy is fully set, no zombies should be able to eat the Endangered Pepper-pults or even reach behind your defense lines.

Note: This strategy only works if you plant the plants exactly.

Created by A plant 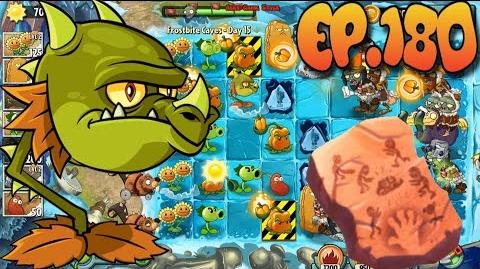 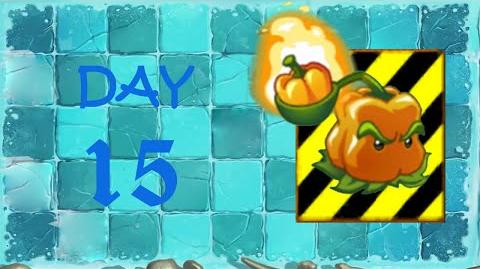 Frostbite Caves Day 15
Add a photo to this gallery

Retrieved from "https://plantsvszombies.fandom.com/wiki/Frostbite_Caves_-_Day_15?oldid=2357818"
Community content is available under CC-BY-SA unless otherwise noted.