The player should not be overwhelmed by the amount of flags, nor the objective. This level is relatively easy if the player has a decent set-up. Blockhead Zombies can easily barge through defenses if left untreated. Hunter Zombie can stall behind other zombies throwing snowballs, only making the situation worse. However, the main threat of this level is the Sloth Gargantuar at the end. He can throw three Yeti Imps past slider tiles, which the player might not be ready for. Especially since this is the first encounter of Sloth Gargantuar, and the fact Dodo Rider Zombie does not appear.

Created by Insert Your Name Here

Note that the premium plants are optional. You can win without the plant, but it'd be better to use it if you own it.

You will have to start planting Twin Sunflowers. Fill the first column with them, and use the Puff-shrooms to hold off the zombies. Prioritize planting Twin Sunflowers until Pepper-pult has his recharge ready. The Pepper-pult must be planted on the second and fourth rows of the second and the fourth columns, so it will be able to warm all plants. Remaining spaces of second row should be Twin Sunflowers. Start planting Snapdragons when stronger zombies spawn, and as well as Primal Wall-nuts. Only three of them are needed, and the rest should be filled with Snapdragons. It is not very hard to stop Blockhead Zombies if you have the Hypno-shroom, but Primal Wall-nuts can be easily replaced and when they come, you'd usually have enough sun for establishing the defense and repairing them. Hot Potato is just for emergencies, such as a plant gets frozen and either there's no Pepper-pult that can reach it, or a zombie gets near the house. Repair Primal Wall-nuts if needed. This should easily allow you to defend until the Sloth Gargantuar appears on the final wave. Note that since the Primal Wall-nut can resist 2 smashes and a third will destroy it. Keep repairing the Primal Wall-nut and he won't be able to breach through your defenses, if you defeat the rest of the final wave, which is not hard with the Snapdragons around. 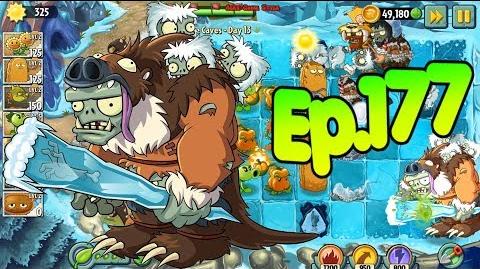 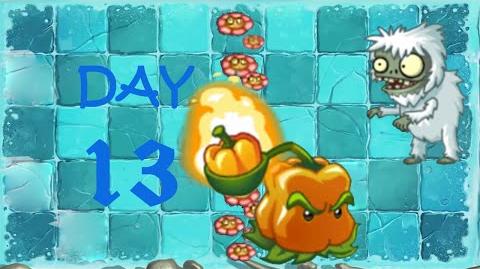 Frostbite Caves Day 13
Add a photo to this gallery

Retrieved from "https://plantsvszombies.fandom.com/wiki/Frostbite_Caves_-_Day_13?oldid=2357816"
Community content is available under CC-BY-SA unless otherwise noted.