Plan your defense and defeat the zombies
Frostbite Caves - Day 12 is the twelfth level of Frostbite Caves in Plants vs. Zombies 2. It is a Last Stand level. The player is given 1900 sun and one Plant Food. When this level is finished for the first time, the player gets a Frostbite Caves pinata.

The zombies and the gusts from icy winds in this level appear in a fixed pattern, so it is up to the player to provide a better countermeasure.

food Spring Bean+ Blover combo to finish the level quickly. As of the 6.71 update, this strategy no longer works because they have removed the Spring Bean/Blover combo.

EDIT by Mathdude314: Here is the setup in picture form:

If you chose Kernel-pult or Cabbage-pult, place it instead of the Peashooters.

If things get rough, use Plant Food on a Pepper-pult (for damage) or on an Infi-nut (for defense). If the zombies start breaking through in the final wave, shovel plants in rows that have no zombies.

Place the plants in this order:

Save up your Plant Food for the last wave. Celery Stalkers will take care of all high toughness zombies.

The Celery Stalkers are positioned so that they can never be eaten. Zombies will get pushed out of the way, then pushed back again into the range of the Celery Stalkers. The only danger is the biting winds and the Hunter Zombies as they will freeze your Celery Stalker.

Plant Cold Snapdragon in the pattern like that picture (Behind sliders and 2 more) since Cold Snapdragon cannot be frozen by Both Freezing Wind and those Hunter Zombies. When you see Dodo Rider Zombies are flying, Use Blover to blow them away at that moment.

Another Strategy
Add a photo to this gallery 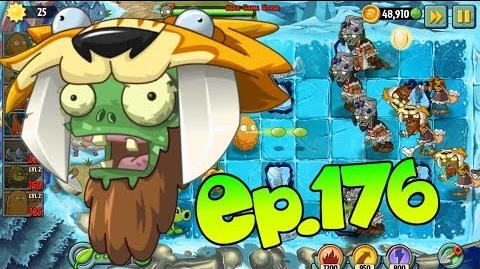 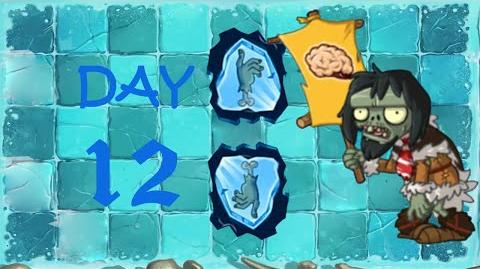 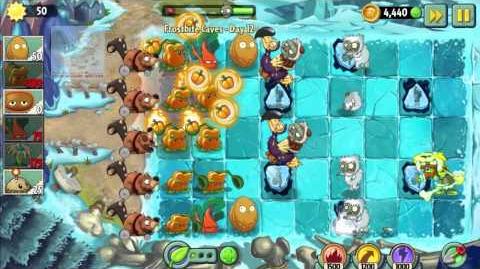 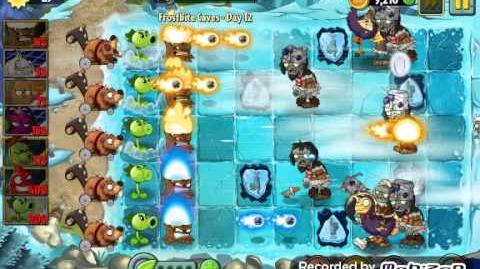 Retrieved from "https://plantsvszombies.fandom.com/wiki/Frostbite_Caves_-_Day_12?oldid=2357815"
Community content is available under CC-BY-SA unless otherwise noted.